The Pageant of the Pacific Virtual Program

The Pageant of the Pacific Virtual Program 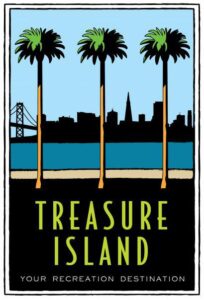 In the 1930s, San Francisco built a brand-new island on San Francisco Bay, as tension grew between the United States and Japan. How did the international crisis affect plans for this new island? The “Golden Gate International Exposition: A Pageant of the Pacific” chose “Pacific unity” as its theme, which deeply influenced the fair’s lovely and exotic architecture, its art, programming, choice of participants, and even entertainment. How did Treasure Island get transformed into a Navy base? And how did the Treasure Island Museum emerge from all of this?

Anne Schnoebelen is a writer and historian who has served as a board member at the Treasure Island Museum for many years. She is an advocate for the preservation of Treasure Island’s legacy in print, interviews, programs and social media. She has given many programs on the history of Treasure Island, ranging from its military and aviation origins, its founding, and its Pacific theme, to its influence on Walt Disney.

If you have any problems registering, please contact Donna Grier at info@museumsrv.org or call (925) 837-3750. You will receive a confirmation email with the Zoom link upon registration.