Gold and the Harlans of San Ramon – Part I 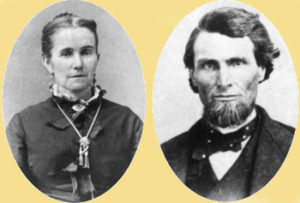 Nearly 160 years ago, gold was found in California, a discovery which transformed the rural Mexican hinterlands into a booming state. On Jan. 24, 1848, a diarist in Coloma wrote “this day some kind of mettle was found in the tail race that looks like gold.”

Gold fever gripped the population, emptying Alta California’s cities and changing California forever. In the span of a year, the pastoral days of Hispanic culture were ended as the energetic and chauvinistic Americans came to mine and stayed to settle. San Ramon Valley pioneers were part of it all.

Some, like Mary and John Jones, Joel and Minerva Harlan, Leo and Jane Norris, William and Mary Lynch and Jose Maria Amador were already in California when gold was found. Others, including Andrew and Dan Inman, Albert Stone, R.O. Baldwin, William Meese and Felix Coats, came to California for the gold.

Our best stories about the early gold rush involve the Harlan family because of their links to Peter and Elizabeth (Jane) Wimmer, who were in Coloma that cold Jan. 24th. The Wimmers came to California because Joel Harlan’s father, talked them into it. George Harlan had always possessed a touch of wanderlust, and when he read Lansford W. Hastings’ book The Emigrants’ Guide to Oregon and California, he decided to leave Michigan and strike out for the West Coast. His nephew, Jacob Harlan, wrote that George “declared that as soon as the harvest was over and his grain sold, he would sell his farm and leave for California.”

A real apostle for the move, George brought his family and extended family along. According to his daughter, Mary Harlan Smith, he also “hunted up his (ex) brother-in-law Peter Wimmer who had moved to Missouri…and persuaded him to join our party with his family.” When George’s sister died, Peter was widowed and he had remarried Elizabeth Baiz. Two first cousins, Jacob and Joel Harlan, were teen-agers on that trip and called the Wimmers “Aunt Jane” and “Uncle Peter.”

The large Harlan-Young party (the other family contingent was headed by Samuel C. Young) arrived in California in 1846, barely escaping the early Sierra storms which sealed the fate of the Donners. The story of this trek is told in Jacob Harlan’s book California, 1846-1888. Once in California, the Wimmers stayed at New Helvetia (later Sacramento) while the Harlans moved to the Bay Area.

Capt. John Sutter of New Helvetia had been looking for a better sawmill location for years. Finally, Aug. 27, 1847, he signed a contract with James W. Marshall to erect and operate a sawmill at Coloma, about 45 miles from the South Fork of the American River. Marshall hired Wimmer as assistant, thirteen Mormons and some local Indians.

Marshall and sixteen year old John Wimmer left the fort on Aug. 28 to select the specific site for the mill and were soon joined by Wimmer’s father Peter, Jane and the younger children. Jane Wimmer cooked for the crew, in addition to caring for her family.

Histories tell us James Marshall discovered some pieces of gold in the river as he inspected the progress of the mill work. Several tests were applied to the metal, including boiling it for hours in a solution of lye which Jane Wimmer was using to make soap. Jane had come from mining country and had panned for gold as a girl near Auraria in Georgia. Later she said that her son had brought her a nugget. “I said, ‘this is gold, and I will throw it into my lye kettle, and if it is gold, it will be gold when it comes out.’”

A letter from Peter Wimmer to the Harlan boys told about his work on the sawmill and said their son had discovered the first gold. He wrote that the news was out, even though Sutter had tried to keep it quiet. According to the letter, Sutter, Marshall and Wimmer had taken the precaution of calling the local Indians together and leasing 12 square miles of land around the mill from them.

No matter who found the first gold, news of easy riches at the surface of the American River spread quickly in California and beyond.