The original St. Isidore’s church served the community faithfully for over 50 years. 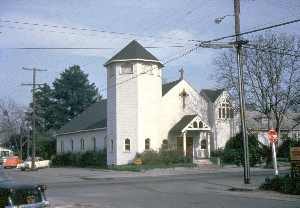 The church building itself evolved, adding a taller bell tower and white siding. Father Henry Plunkett came in 1952 and watched as the church membership grew too large for the facilities.

Columnist and teacher Al Gentile was active in the Holy Name Society at the church. In one of his columns he recalled Father Plunkett’s plans for expansion. “I remember well the night Father Plunkett told all of us in the Holy Name Society his plans for the future. He invited us all to have dinner with him at the Danville Hotel and, in his after-dinner speech, he told us that he had purchased the land on which the church and school now stands (in 1956). And then he lowered the boom: ‘All you have to do now, gentlemen,‘ he said, ‘is to spread yourselves through Danville, San Ramon and Alamo and go out and get enough pledge money to raise a good home for our patron saint, Isidore!’

“ ‘I’m tired of me old house, I’m very much looking forward to me new house,’ Father Plunkett said with a pronounced Irish brogue. The old Irishman had a remarkable sense of humor, and that’s the truth. Ask anybody who was there at the time.”

The new buildings moved quickly. First the school was completed in 1958, designed by Jack Buchter, A.I.A., of Lafayette and assisted by James Crossen of Danville. The contractor was George Hanson of San Leandro. The school was conducted by the Sisters of the Third Order of St. Francis and a convent with chapel was situated adjacent to the church. It was formally dedicated in 1963.

Since the Sisters were not ready to open the school in 1958, the rooms were rented for public school classes from 1958-1960. The Danville School District was overcrowded and scheduling double sessions. Bruce Marhenke recalls that Montair School opened in 1958 and four classes, dubbed the “Montair Annex” were conducted at St. Isidore’s for the next two years. They also had an office which the teachers shared.

When Vista Grande opened in September, 1960, most of the students went to that school. The boundary line for Montair and Vista Grande was Danville Blvd. Marhenke was the first principal for Vista Grande and recalled students cutting across open fields down Bobbi Lane to school. The freeway was not built from Walnut Creek to Danville until 1964.

As the congregation grew, additional improvements were needed. In early 1978 the Msgr. Julius Benson Community Center was completed. The next year with the parish population reaching 2,4000, St. Joan of Arc Parish was established. In 1994 the diocese decided to improve the facilities instead of creating yet another parish when the parish census reached 3,600.

Today La Gonda Avenue has St. Isidore Catholic buildings on both sides. The school has expanded to include, administrative buildings and a double gymnasium, the Rettig Activities Center, Kids Konnection for baby and child care and a Youth Center with activities and meeting space.

Local drivers all notice the creamy white statue of St. Isidore the Farmer on La Gonda, erected in 1985 on the 75th Anniversary of the parish and dedicated to the memory of Msgr. Julius Bensen. Msgr. Bensen was recognized as the builder of the church, school and rectory on La Gonda Way where he was Pastor from 1959 to 1978.

From a little country parish, to a thriving twenty-first century one, St. Isidore’s has been blessed by energetic pastors, diverse programs and generations of faithful parishioners. Congratulations are in order for its Centennial.