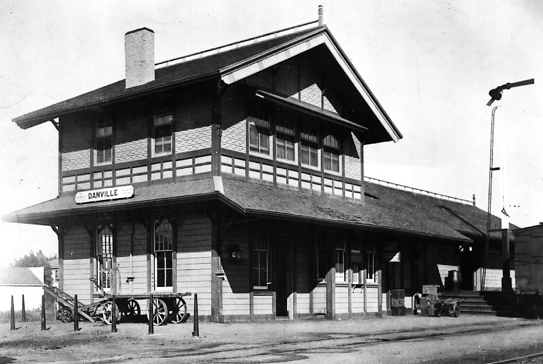 Long before the San Ramon Valley became a home to Americans of European descent, Native Americans lived here. The paths their feet made along the water of San Ramon Creek were to serve as the basis for roads. They enjoyed Mount Diablo – at times for hunting, gathering acorns and camping

In 1772, Pedro Fages and Father Juan Crespi led a Spanish exploration party into the valley. During the following years, the “Rancho Period” came about after large grants of land were awarded to Mexican soldiers. These soldiers were not farmers, but raised cattle, horses and sheep. They also sold hides and tallow. For transportation they rode horseback or used carts, so wagon roads were not needed or developed. The Native American population diminished over time and was gradually replaced by the Spaniards, Mexicans and later by other European settlers from the east.

All during these eons, the valley was a beautiful, quiet place with its large oak trees, its wildflowers, its birds and animals, its clear, clean water  -- and towering over and watching the valley was scenic Mount Diablo.

With the discovery of gold near Sacramento, men came from the eastern states and from around the world. They walked, rode horses, pushed carts and came by ship – all to make their fortune in California beginning in 1848. Some of the men passed through the San Ramon Valley on their way to mine this wealth. In a few short years, these miners were to become farmers and, having remembered this beautiful valley, returned here to purchase, squat, or in some manner acquire land from the Mexicans. Ship captains gave up the sea to farm, and Portuguese sailors left their ships to come to this valley to settle.

The land was found to be fertile, the climate was ideal, and there was a market for farm products. Wheat, barley, onions and cattle were the initial products grown. The farmers were an adaptive group, changing or adding crops over the years to include fruit – cherries, apples, plums for prune production, strawberries and pears. Hay was kind of the 1890s, with grain a healthy second. In the 1920s and 1930s the valley was the pear capital of the world. Almond and walnut groves of hundreds of acres were also planted in the valley.

Homes, a few remaining today, began to be built in the 1850s and 1860s by the farm families. In addition to food and shelter, wagon roads were greatly needed by these farmers for use in transporting people and farm products. A system of county roads was established with Road No. 1 running from Martinez, the “county seat,” to Stone Valley Road; and with Road No. 2 continuing along the creek south through Danville on to Mission San Jose. In later years, these roads would become a part of State Highway 21. Roads leading to individual ranches gradually acquired the name of the family, and, as more people settled or lived on these roads, the county accepted the roads as pubic roads.

Post offices were established, first in Alamo in 1853, then Danville in 1860 and San Ramon in 1873. In addition to schools and churches which were needed and built in these three villages, hotels and stores came into existence to serve neighboring farms and travelers. The community Presbyterian, called the Pioneer Church, traces its history back to 1853 when the Board of Home Missions sent a minister to the valley. St. Isidore, another older church, built its first church building in 1911, after having provided a mission church in the valley for many years. 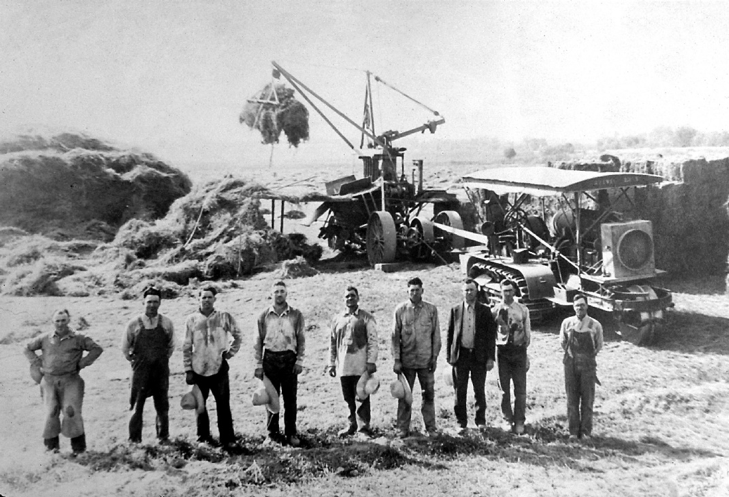 Hay baling in Green Valley around 1920

The valley continued to receive settlers all through the years. It became a melting pot for Chinese, Japanese, Portuguese from the Azores, Irish, Canadians, Germans and Norwegians, as well as others. Immigrants worked in the hay fields; they were cooks and gardeners for farm families; they cooked for field crews; and many found town jobs as blacksmiths, postmasters, and railroad workers.

For the first 40 years after the settlers of European descent came, from 1850-1890, this agrarian society managed to live with its dirt roads, which were muddy in the rainy months and dusty in the hot months. Farm products had to be hauled by horse and wagon to Pacheco or Martinez where grain ships docked. Later the main line railroad in Martinez or Hayward could be used for shipping.

But the coming of the Southern Pacific Railroad up the valley in 1891 at last allowed the San Ramon Valley farmer to compete with other parts of the state or country; to have warehouses for storage; and to provide passenger service for the families and travelers. Soon a part of downtown Danville was surveyed and laid off into small lots; small homes were built; small businesses opened; a hotel was built on Railroad Avenue; the San Ramon Valley union High School opened its doors in 1910 in a rented house on Church Street in Danville; a library was begun; and from 1914-1924 an electric trolley operated from near Walnut Creek through the valley and up to the Diablo Country Club.

Blackhawk Ranch began in 1917 when Ansel Easton and William A Ward bought 1,200 acres east of Danville. They raised short horned cattle and Shire horses; later Arabians and Hereford cattle were added to the stock. Walnut groves were also added to the ranch. The large ranch eventually included 6,500 acres. The Blackhawk Ranch continued to grow walnuts, hay and grain and beef cattle. Seven acres of very beautifully landscaped gardens were well-maintained and enjoyed by the owners and visitors.

The Grange organization became a strong force in the valley and built its hall in 1874 on Front Street in Danville. It not only was a voice for the farmer in securing fair prices for his crops, for getting roads and for educating farmers about better farming methods, it was the leader in helping to provide schools, a library, electricity and paved streets. And it provided a good place for the isolated families to have parties, dances, dinners and good, clean fun. Life was getting easier for the farm families.

By the 1890s, families had time for lodges such as the native Sons of the Golden West, the International Order of Odd Fellows, Rebekahs and many others. In 1911 the Danville Chamber of Commerce was formed and provided much help to this growing valley.

Written in 1989 for the Danville Area Chamber of Commerce