The Diablo Valley has been inhabited for thousands of years.  What do we know about the people who lived here? Scholars in several fields grapple with this question. While the people’s ancient culture and names can never fully be known, many of their individual identities during the late eighteenth and nineteenth centuries are now known.

The Spanish Fathers came to Alta California caring about names. They kept score by recording names and numbers. All of the natives who went into the missions were given new Spanish Catholic names.  The  Fathers also recorded their original names and wrote down the village names of the “neophytes,” as they called the baptized Indians.

Scholars studying California Indians have named various groupings of tribes. Based on unique characteristics of language, they have roughly described cultural territories. Over decades of study, these territories have become more defined.  For some time the tribes of much of central and eastern Contra Costa County have been known as Bay Miwok. One of those tribes, or tribelets as scholars call them, were the Chupcan of Diablo Valley.

Prodigiously detailed work by Dr. Randall Milliken has made it feasible in recent years to know the names of the actual individuals and their families. What follows is a partial family history. Though this paper focuses on the Chupcans, it is a sample of what we could learn about all of the Bay Miwok of Contra Costa County in the period after 1770. The basic genealogy, which adds a human dimension to the larger history, is factual. It comes from first-hand Spanish records.

Mol-le was the oldest Chupcan documented in the registers of Missions San Jose and San Francisco. Born in Chupcan lands about 1737, forty years before the American Revolution, she lived to be 79 years old. Her family survived longer than any known Chupcan family during the Spanish/Mexican period. The Catholic registers of baptisms, marriages and burials reveal four generations of her descendants covering more than 100 years.

Mol-le's immediate family is unknown. Nothing is known about her parents, brothers or sisters, husband or children. She would have been of age to marry and have children after the mid 1750s. Since she had at least one grandchild, it is assumed that she married, although no record of her husband has been found. During the early Chupcan contacts with the Spanish she was in her mid-thirties.

In March of 1772, Father Juan Crespi, Lt. Pedro Fages and a small band of Spanish soldiers from Monterey set out to find a land route to the North Bay. Coming north from San Jose, they roughly followed the route of the Nimitz Freeway, turned east and followed the route of Interstate 80. Then they followed the edge of San Pablo Bay over to Martinez. Continuing east along the shore, they found their way blocked by swamps from Pacheco to Clyde. Going southeast around the swamp they first encountered the Chupcans. Later they went up over the Willow Pass. This route took them very near two Chupcan village sites.

Because of a post's having arrived from Monte-Rey, we set out from the camp  at about half past six, and took up an east-northeasterly course, through the midst of some very grassy hills; on going a league we came out to a plain, where we encountered …their village, which was very large and extremely well peopled with heathens.

Father Juan Crespi wrote that same day that the natives of the Diablo Valley (Chupcans) were “like the previous ones, fair-haired and very tall.”  By previous ones, he meant the tribe met just previously along Carquinez Strait, of whom he said, “Almost all of them are tall in stature, most of them are the whitest and fair-haired of any that I have seen in these lands, and in quickness, clothing and the nature of their weapons, they resemble the Santa Barbara Channel heathens. The women are the most modest we have seen; the men wear their hair long, most of them with it tied into a kind of queue…”. 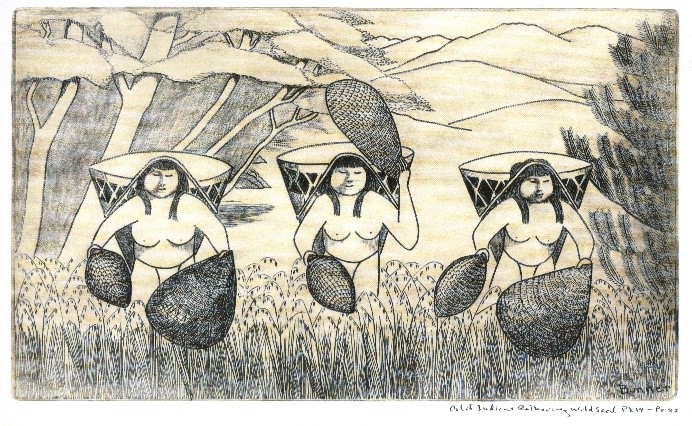 Pedro Fages had described the Santa Barbara Indians: “These natives are well built and of good disposition, very agile and alert and ingenious to a degree.”  He further described a town just north of Santa Barbara on an estuary containing in excess of 100 houses. As one carefully reads the travels of the Fages expedition through California, it becomes clear that the natives of Diablo Valley compared favorably with the most advanced tribes met in all of Alta California.

After the first contact, there were years of respite in the Bay Miwok homeland, while the Spanish focused on the San Francisco peninsula.

Mol-le and her family, and the whole tribe of Chupcans, had other direct encounters with the Spanish in subsequent years, but it wasn’t until later in her life that the exploratory visits were transformed into invasion. By 1795 Franciscan missions and Spanish soldiers were having a devastating effect on the Indians of the Bay Area. That history is described in detail elsewhere.

The Spanish encroachment into the inner valleys of the East Bay (1795-1812) occurred during Mol-le’s old age. Since none of her immediate family came into the missions, it seems likely that they were among those who chose to avoid, evade, fight or die for their way of life. Nearly forty years passed from the first Spanish exploration until Mol-le and her family were taken into the mission. The events leading to that are dramatic.

The construction of Mission San Jose in 1797 marked the beginning of the end for the Chupcans as a tribe. There was immediate resistance all over the inland East Bay. Plans were made for attacks and there were warnings from the Saclan and Volvon to others not to cooperate. At same time that the Padres carried the carrot of promised material and spiritual power to the Bay Miwok, the soldiers brought the sticks of fire and horses to encourage and chastise those slow to submit to Christian/European civilization.

The Saclans of the Lafayette area attempted to defend their villages by digging trenches around them to stop the horsemen. But like all out-gunned defenders, they were reduced to hit and run battles and escape and evasion. Some sought refuge with their neighbors, the Chupcans.

The records suggest that nearly every year from 1800 to 1805 the soldiers came north from San Jose to recover mission runaways who had sought refuge in Diablo Valley and the Contra Costa environs. It was in one of these excursions into the swampy wilderness of the Chupcans that one of the soldiers named the place Monte del Diablo (Wilderness or Thicket of the Devil), after which Salvio Pacheco named his rancho in Diablo Valley. Later the name was transferred to present-day Mount Diablo.

About this time, the Chupcans decided to completely abandon their villages in Diablo Valley. A few had gone into the missions, but most left to settle near many of their relatives by marriage in Solano County. Some were married to the Carquines of Benicia, but many were married with the Suisuns further up the north side of Suisun Bay.

By the first decade of the nineteenth century the padres in San Francisco and San Jose were greatly distressed by the resistance of the East Bay inland natives. On February 28, 1807, Padre Abella of Mission San Francisco wrote to the governor: “I give you the cursed news that the pagan natives and runaway Christians have killed between eleven and thirteen neophytes of this mission.” He then describes a series of events that begin when a Tatcan child of the San Ramon Valley area died and his parents and others escaped back to Contra Costa. Battles ensue between various Indian tribes.  The padre said, “You can imagine the confusion here. I myself thought about running away so that I would not have to face it.” He called on the Governor to authorize a punishing expedition.

In 1810, the third incident in six years of mission Indian killings occurred on the northern shore of Suisun Bay. Seven neophytes had obtained passes, perhaps to try to persuade their pagan relatives to join the mission. Those who visited the Carquins at Benecia got back alive. The three who had continued on to Suisun were killed by their relatives, according to pagan Chupcan witnesses. These reported deaths brought on a large Spanish expedition later in the Spring and a brutal final battle that destroyed Chupcan and Suisun resistance.

That expedition, led by Second Lieutenant Gabriel Moraga, included seventeen Spanish soldiers and an auxillary force of mission Indians from San Francisco. On May 22nd, 1810, they attacked the Suisuns and Chupcans, and perhaps others. At least eighteen pagans were taken prisoners and left for dead.

The governor of Alta California wrote a letter to the Viceroy in Mexico telling of the final battle:

Toward the end of the action the surviving [Indians] sealed themselves in three brush houses, from which they made a tenacious defence, wounding the Corporals and two soldiers…After having killed the pagans in two of the grass houses, the Christians set fire to the third grass house, as a means to take the pagans prisoner. But they did not achieve that result, since the valiant Indians died enveloped in flames before they could be taken into custody. The second lieutenant says that he could not reason with the pagans, who died fighting or by burning. There was no room for compassion in this disaster wrought upon them by our troops, because of their resistance.

This Suisun massacre ended the organized resistance of the Chupcans and their Suisun relatives. Most of those Chupcans who converted did so in the year after this battle.

Very likely Mol-le was nearby.  She was not among those who went to the mission shortly after. Why? Where did this 73 year old woman go? Who cared for her? The mission records are silent on her husband and children. Her grandson, Jattate, later named Narciso, went into Mission San Jose a full fourteen months after the massacre with a large group of mostly Ompins, who lived in the Pittsburg/Collinsville area. Mol-le followed a year later in June or 1812. She was baptized there about the time many mission Indian children were being baptized and between the mass baptisms of Ompins and Julpuns. Perhaps she had been living with the Ompins.

The record gives detailed information about grandson Jattate’s marriage, the fate of his children and his grandchildren. Grandmother Mol-le died near San Jose' on the 9th of March, 1816, nearly 80 years old.

When we look at the geneaology of Mol-le’s family, it allows us to describe the dramatic conflicts between Indians and Spanish in terms of real people with real names. It provides a new method of approaching the historical demography of California Indians.  It provides a framework for a more complete history of the Chupcans who once lived in harmony with nature in today’s Concord.