On March 22, 1974, the San Ramon Valley Historical Society dedicated its second plaque, a historic school bell which called students to school in the village of Alamo from the 1890s to the 1920s. The old bell and new plaque were placed the new Alamo Elementary School courtyard, located at 100 Wilson Road in Alamo. 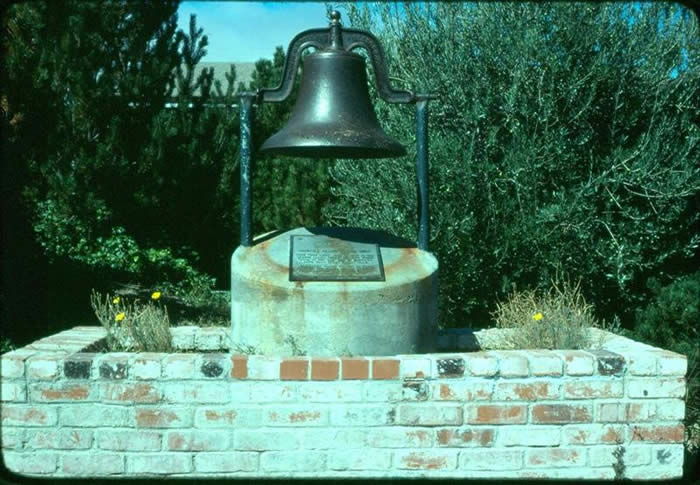 Alamo pioneers established the first school in the San Ramon Valley in 1854, led by the indomitable pioneer Mary Ann Jones. She wrote about the school in her autobiography:

“People began to come in with their families and we began to think about having a school for our children. So we built a schoolhouse on the Hemme Place (near today’s El Portal and Danville Boulevard) and hired a teacher.”

She also boarded the teacher, Richard Webster. One of the students, Jimmy Smith, had compliments for teacher Webster who was popular with the students. Smith said he had good discipline but never heard of him punishing students.

Later Alamo grammar schools were built closer to the village center on the west side of the County Road (now Danville Blvd.) on a  2 ¼ acre lot which was donated by Mary Ann Jones. Three schools served students on this property, built in 1876, about 1895 and 1940.  Trustees in those early years included J. M. Shuey, J. Thirston, L. Humburg, A. W. Stone and M. W. Hall. Miss Ida Sarah Hall taught at the school for years.

In 1921, the Alamo Community Club raised funds to build a large playground apparatus with swings, sand box, basketball and handball courts and mapped off  a baseball diamond. Nevertheless, the school was beginning to show its age.

A new, modern Danville elementary school was built in 1922 not far south of Alamo near San Ramon Valley High School.  Alamo residents discussed joining the new Danville Union District but ultimately voted against it. Some of the parents decided to send their children to the Danville school.

Alamo’s grammar school was extensively remodeled in 1924. Possibly during this renovation, concerns were expressed about the stability of the bell during a large earthquake. The bell and belfry were removed from the roof and the bell was placed on a large post elsewhere on the site. Later the Alamo bell languished in a maintenance yard and some thought it was lost.

As Alamo’s population grew after the war, other elementary schools were built including Stone Valley (1952) and Rancho Romero (1959). From 1958-1959 the twenty-year old Alamo School had so many students that rooms were rented at the Methodist Church to accommodate the growth.

Today’s Alamo Elementary School was built in 1965. After re-discovering the original Alamo School bell, it was mounted on a concrete base surrounded by plants for the 1974 dedication which was facilitated by Principal John Roberts.

It was quite a community effort, with the plaque paid for the by the Society and the base designed by Monte Vista student Bob Hetzog and built by Marshall Tuttle as part of his Boy Scout eagle project. Others who helped: the Alamo School Parents Club, Broker’s Realty of Walnut Creek who paid for the base materials, the Ann Louck Chapter of the DAR which donated plants and flowers and Cub Scout Pack #53, Den #2 which did the planting.

More than 100 people attended the dedication led by master of ceremonies  Al Jones, President of the San Ramon Valley Historical Society. The bell is still a special feature of today’s Alamo School.