The Boone name was made famous by frontiersman Daniel Boone in the 1700s. Several of his descendants came to California after the Gold Rush and landed in Danville and San Ramon.  Numa Boone was one of them who, with his wife Minnie Thorne, bought land and built a classic Dutch-style house in San Ramon along the county road in 1900. 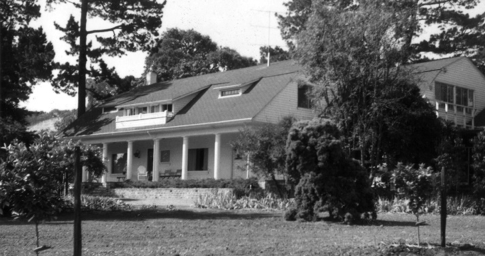 Numa Sims Boone was the second child of James and Sara Boone who came to Danville for good in 1865. James and his brother Wellington had originally traveled  to California in 1852, then moved back to Missouri in 1861. Boone was born in 1867, educated locally, attended high school in Oakland and ranched with his father on the home place and then for himself.

He and Minnie Thorne Boone were married on August 8, 1899.  Her parents, Captain Charles and Mary Thorne lived in Santa Clara where she was born in 1863.  The Boones pooled their money and initially bought 200 acres in San Ramon, part of the original Amador Rancho and Russell Ranch land. They built their two-story, 22-room house in 1900.

Prominent in the community and successful in his agricultural enterprises, he owned 250 acres and worked several thousand more.  Over the years the Boones produced grain, hay, tomatoes, pears, walnuts and raised various kinds of stock.  Numa Boone was also President of the San Ramon Valley bank for ten years.  He was a Granger, a member of the San Ramon Parlor of the Native Sons of the Golden West and the Woodmen of the World.

Their son and daughter-in-law, Travis and Ruth Boone, owned a large spread adjacent to Bishop Ranch, planted primarily to walnuts and tomatoes. Their rectangular-shaped ranch extended across the valley from the wooded hills on the west to the SP railroad on the east.  They had a flag stop next to the railroad.  Boone did extensive custom grain harvesting in the Diablo and Tri-Valley and invented a truck-mounted device which efficiently knocked down walnuts and was used for date-picking in other parts of the state.

In an interview Ruth Boone recalled that, after bachelor ranch hands from the ranches were paid, they would often enjoy themselves gambling at a place called Connie’s in San Ramon village. She remembered Connie Young telling her “I made a fortune from the men at the Boone and Bishop Ranches.” And she said he probably was right. 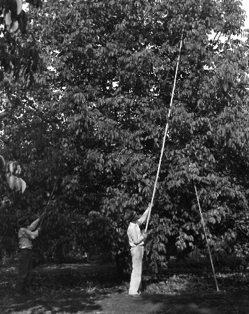 Today the Boone Ranch headquarters is the 16-acre Forest Home Farms Historic Park, a San Ramon park which focuses on the San Ramon Valley’s agricultural history and includes the restored 1877 Eliza and David Glass House. The entire park is recognized as historic by its placement on the National Register for Historic Places.

There are several interpretive panels on the grounds of this historical park, recognizing the Boones, Indians and the Glass family and house.

David Glass and Eliza Jane Hall were married in 1844 in Iowa. He was an enterprising merchant in the Midwest which included two trading trips down the Mississippi River. David and Eliza came to California in 1850 with one child, staying first in Placerville where the child died, then moving to northern San Ramon Valley in November of that year.  They ran a ranch and store and planted the first Valley apple orchard.

In 1858 they moved to a 718- acre ranch 3 miles south of San Ramon, purchasing the property from Leo Norris. Their prosperous ranch eventually included a handsome Italianate two-story house (1877), three barns, a worker’s house, a granary, three hen houses, a wind-mill and a tank house.

They had seven children and, although he joined the Danville Presbyterian Church in Danville initially, David was a pillar of the new Methodist Church in San Ramon which was built in 1888.  Both David and Eliza were well respected and active in the community. Children: Albert W., Clara, Annetta (Anita), Loretta, Irena, Frank L., Frederick and Rolla C.

David and Eliza left the ranch property to their children, primarily to Albert Glass.  Daughters Anita (1856-1922) and Loretta (1858-1931) managed the property and named it Lora Nita Ranch. Anita was an artist and a leader in several organizations, including serving as President of the San Ramon Hall Association which planned and built the San Ramon Hall in 1911.

The Glass House has been moved from its original location and beautifully restored by the City of San Ramon; it sits south of the Boone House in Forest Home Farms Historic Park and is available for tours.

As a girl, Eliza Glass was made to work without rest in her mother’s hotel and her mother made it very clear that she was not to marry. Young (and handsome) David Glass met her and, after a romantic courtship, they eloped to the home of sympathetic neighbors next door where they were married. Later her father came to California and stayed with them.

After 1900, three showcase homes were dotted along San Ramon Valley Road going from south to the San Ramon village: Boone, Glass and Harlan. Now both Boone and Glass houses are together at Forest Home Farms Historic Park. The Boones are buried in Alamo Cemetery. The Glass and Harlan family gravesites may be found at the Dublin Cemetery.