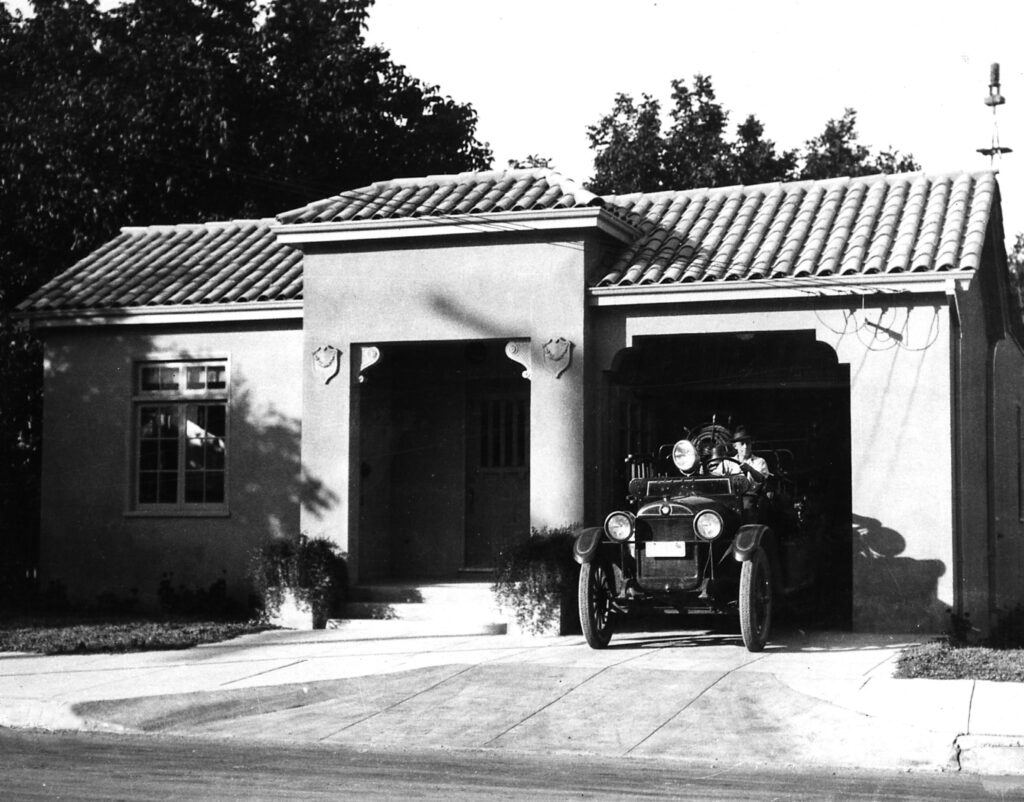 Fires were a terrifying and real fact of life for the San Ramon Valley’s early pioneers. The long, dry summers and lack of water supply were an enormous challenge when fires started.

The Contra Costa Gazette covered one conflagration in July of 1891:

“We have had considerable excitement this week. The hot weather has dried grass so thoroughly that the least spark makes a roaring flame in a very few seconds.  On Monday everyone was called out by generous impulse to fight a fire in Mrs. Flournoy’s place near Danville. A hundred men or more rushed immediately to put it out with wet sacks and plows, but the field (a crop of chevalier barley) was strewn with bundles of heavy grain and six inches of barley leaves lay all over the ground, so it was useless to try to stop it until the wind turned and blew the flames back.”

Volunteers fought fires with gunny sacks soaked with creek water and put water in leather buckets to douse the flames. And, as with the Flournoy fire, they depended on the wind to change.

All of these men owned property in downtown Danville. Joe Freitas owned the Freitas Big Store (near the corner of Prospect and Hartz), Groom had a blacksmith shop on Prospect and Railroad, Harvey Eddy’s houses were at the corner of Church and Hartz, Clarence Close had a large house on Diablo Rd. and owned businesses on Front Street and Ed Wiester’s large warehouse sat north of the Danville S.P. station property.

The organizing minutes of the Danville Department stated that “Its object shall be the preservation and protection of property from and during such fires as may occur in the village of Danville.” A Fireman’s Ball was held in March of 1912 which raised $169.20. After expenses, $100 was deposited in the San Ramon Valley Bank in downtown Danville.

The District was supported by many volunteers, using a trailer with ten 10-gallon milk cans full of water and gunny sacks.  The trailer was kept downtown and, when a fire occurred, the nearest volunteer with a trailer hitch would connect the trailer and get it to the fire. Ranches usually kept buckets, milk cans with water and early extinguishers on hand.

In 1921 a state law enabled special fire districts to organize and levy a tax to support the districts.  So on September 6, 1921, the Danville Volunteer Fire Department became the Danville Fire Protection District, headed by Commissioners James Jones, William A. Ward and Frank Rutherford who were appointed by the County Board of Supervisors.

There were evidently lively boundary discussions with several San Ramon men, including Fred Wiedemann, Joe Bettencourt, Bill Meese and Elmer Baldwin. At that point the Meese Ranch (today’s Greenbrook Homes) was part of the San Ramon School District. Finally, the official boundaries became the Alamo, Danville, Sycamore and Green Valley Grammar School Districts plus Elmer Baldwin’s land, an area of about fifty square miles. Frank Rutherford, who managed San Ramon’s Bishop Ranch, resigned from the Commission since San Ramon was not included in the boundaries.

On March 18, 1922 Ward, Jones and Freitas became the first elected Commissioners. At a May 20 “preparedness meeting” the commissioners appointed Oscar Olsson to be Fire Chief, R. J. Monroe as Assistant Chief and H. M. Fichtenmueller as Captain.  On July 15, 17 firemen met and “Commissioner Jones, in a few well chosen words, presented each one with a badge of authority.” In April the department made its first investments.  A Reo-American La France 45 chemical fire truck was purchased for $4,140 and was delivered shortly after.