Today the Town Meeting Hall at 201 Front Street is used for official Danville meetings and rented for events. In many ways, the Hall symbolizes the Town’s desire to honor its history. Front Street was the village’s main street during the nineteenth century, complete with stores, blacksmiths, saloons, a school, Grange hall and church. Two churches were built at 201 Front: the Danville Presbyterian Church in 1875 and, after that building burned down in 1932, a new mission-style church in 1933.

The Rev. R. S. Symington wrote a history of the church which appeared in the 1882 History of Contra Costa County by J. P. Munro-Fraser. In it he recounts the events which led to the founding of the Danville Presbyterian Church. In the 1870s there were several Protestant groups in the valley, including Christian, Congregational, Methodist-Episcopal and Cumberland Presbyterian. Since there were too few people to build a church for each denomination, a meeting was called at the Danville school to build the church and choose which denomination it would house. It was agreed to state on the same ballot how much each person would donate to the church, regardless of which denomination won. This demonstration of democracy in action chose the Presbyterian denomination and elected the Rev. Symington as the first pastor.

Funds for the building came from the Presbytery of San Francisco and local subscriptions. The architect was Charles Giddis of San Francisco and the builder was C. E. Dunchu at a cost of $3000. One newspaper article said the final cost was $6500. The cornerstone was laid on October 1, 1875.

This lovely New England-style Danville Presbyterian Church was dedicated on June 18, 1876. The first trustees were R. O. Baldwin, J. J. Kerr and David Glass. One of the initial elders was Albert J. Young, who served as clerk of the session for fifty years. A huge redwood tree near the church was planted in honor of the first pastor, Rev. R. S. Symington with a plaque was placed on the tree later.

Rev. Symington wrote this about the church:

“The building of this house of worship is an epoch in the history of the church. It locates the interests of this people. It is a home for the Christian’s soul. It is a moral educator. It stands with its spire constantly pointing to Heaven, every day bearing its silent testimony for God. Every traveler marks it. Every journal in the land notices it. Every pious man seeking a home is influenced by it.”

In 1882 Munro-Fraser described the building as “the handsomest church building in the county.” Pictures show it to be a little gem, all white with a tall steeple. It was a popular nineteenth century style. When Mission San Jose’s original church building collapsed during the 1868 earthquake, it was replaced by a similar style church building. 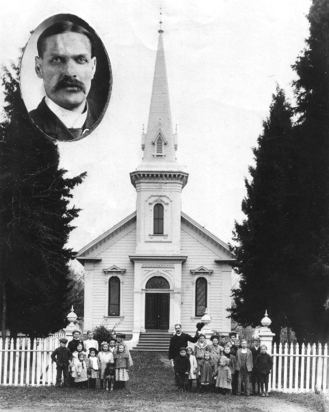 The first Southern Pacific train came to the valley on Sunday, June 7, 1891, and the reporter wrote that Danville “is conveniently near the track, though measurably hidden by the trees. It is a thrifty locality with the modern tendency to progressiveness. The neat church is a conspicuous object from the track, and the sound of the church-going bell greeted the ear as a pause was made at this point.”

The building was a prominent one for nearly 60 years. Photographs of the downtown can be dated by whether or not the steeple can be seen. Wilson Close remembered joining the church in 1928 as a 12-year old. His family lived downtown and he said the church’s annual ice cream social at their house was a popular event each summer.

This church stood until a fire took the building on a windy night, May 27, 1932. The Contra Costa Gazette described the fire as “one of the most menacing fires in this community’s history” and said the winds blew “fiery sparks and shingles to a distance of three-fourths of a mile.”  The church office was unlocked, allowing Jim Root to dash in and save documents including the original union high school district minutes from 1910, but he could not save everything.

Nellie Baldwin headed a committee to rebuild the church. This was the depth of the Depression and they had only the insurance money ($4500) to rebuild. They constructed a Spanish California colonial mission-style church, which they could afford. It had the characteristic mission russet adobe tile roof, arched elements and pale-hued brick walls.

Presbyterians worshipped in this church until they outgrew it and built a new one on El Pintado Road which opened in December of 1951. Al Kaplan and Ann Wiedemann were the last couple to be married in the old church.

Betty Englehart, a wealthy Alamo resident and philanthropist, wanted to open the building for a teen center, since Danville’s population was growing quickly and programs for teens were needed. Wilson Close recalled that the church set the price at $17,000. A committee consisting of Englehart, Ivan Chappell (Superintendent of the Danville Union School District), June Ramos, Close and others held a large bazaar to raise funds. They eventually raised $5000 for the Danville Youth Center, according to Close. It was called the San Ramon Valley Recreation Center by some.

A board composed of individuals, service club and homeowners’ association members supervised the programs. High school student Ken Sandy worked there in 1951. He said it was his first paid job -- 35 cents an hour. Clubby LaCroix, a former world-class tennis player who had run tennis clinics in Danville, became director of the center. Sandy recalled handing out badminton and volleyball equipment and pool cues. He also said he’d carved his and his girl friend’s initials on one of the beams.

For several years recreation programs were run in and around the Center, including tennis, volleyball and basketball. People volunteered their private pools for programs. The popular Dannival celebrations used the center as well. When it no longer drew very many teenagers, the programs ended.

A school for developmentally disabled children took over the building in 1955. According to parent (and later teacher) Elree Langford, that first summer parents scrubbed, painted and fixed up the building and, in September, thirteen mentally retarded preschoolers arrived. The teacher was Lynn Scarlsboro, for whom the school was eventually named. For years it was the Lynn Day School of Lynn Center.

It was rented for a dollar a year, until 1962, when Mrs. Englehart deeded it to the Council for Retarded Children of East County (later Contra Costa Association for Retarded Citizens) for a nominal sum. Danville took the school to its heart, supporting it with Christmas meals at Root’s, special welcomes at the fire station on Hartz Avenue and sweets from the Frontier Barber Shop. Mel Whalen played Santa Claus each year and provided each child with a gift. The Grandmother Go-Getters Club of Danville supported the school regularly as well.

In 1984 the Zion Fellowship purchased the school and used it for a Sunday School and education center for the church’s growing congregation. The Fellowship bought the old Village Theatre as their main church. Elaine Collins said that she knew the building well when it was their Sunday School. “We often joked when we came in on a Sunday morning whether we would find puddles on the floor from the roof leaking, whether we’d be able to get the heaters warm enough to get the little bodies warm.”  Yet “for hundreds of us who made use of their facility, we have a very warm place in our hearts for it. I can hear little voices ringing out and songs being sung as the children came each Sunday morning to learn God loved them and cared about each one of them.”

“I’m very pleased that the Town of Danville purchased the building and so lovingly rehabilitated it, so that it will be available once more for public use. A big part of our heart stays with it.”

In 1988 the Town of Danville purchased the land and building through its Community Development Agency. Architect Jack Kemp of Mackinlay Winnacker McNeill & Associates, Inc. was hired. As it was restored for public use, there were a number of surprises and the costs were hefty. Ultimately the building and grounds improvements cost $600,243. In late 1989, it became available for public use and rental.

Official Council and Commission meetings are held at the restored Town Meeting Hall. It seats 120 people for meetings, 250 people for assembly and 60 for meals. There is a conference room, a small kitchen, a foyer, handicapped restroom and an attractive patio adjacent to the building.

On December 12, 1989, when the Town Meeting Hall was dedicated, it was acknowledged to be a lovely restoration and a symbol of the community’s appreciation for Danville history. Speakers included pioneer descendant Wilson Close, resident Al Kaplan, Police Chief Ken Sandy, and teachers Elree Langford and Elaine Collins.

For many years in Danville’s past this part of Front Street was the center of the community. The original Grange Hall was built nearby in 1874 and a handsome new Danville Grammar School was dedicated in 1896 next to the hall. An area between the school and hall was called Grange Park and was used for picnics and harvest feasts in the nineteenth century. In 1913 the Grange and the International Order of Odd Fellows built a Social and Fraternal Hall next to the church, using the original Grange Hall as a second floor. This building later became the Village Theatre. The community came to these buildings regularly for school, worship, meetings, parties, plays, movies and high school events for much of the twentieth century.

Today the Town Meeting Hall is a linchpin for Old Town Danville. The commercial area and the Front Street Parking lot are in easy walking distance. Nearby are the rehabilitated Village Theatre, Front Street Park with its O’Neill Commemorative, parking lots, and Danville’s library and community center. Unique and well-appreciated, this is a building of significance to Danville and the San Ramon Valley.

Archives at the Museum of the San Ramon Valley