Indians of the Valley and Watersheds

Indians of the Valley and Watersheds

Indians lived in the San Ramon Valley for at least 5,000 years in permanent and seasonal locations.  Their villages dotted the landscape and were always located near to water supplies. Water was used for cooking and cleaning and the creeks provided a variety of fish and water birds to eat.  Young plant branches which were pruned and grew near water yielded a variety of basket materials. California Indians used sweathouses regularly and one part of such use involved bathing in an adjacent body of water.

The watersheds in which they lived provided a cornucopia of rich food resources and varying environments.  Stephen Powers in the 1870s wrote about tribal knowledge of their territories:

“the boundaries of all tribes are marked out with the greatest precision, being defined by certain creeks, canyons, bounders, conspicuous trees, springs, etc., each of which has its individual name…(The mothers) teach these things to their children…Over and over, time and again they rehearse all these boundaries, describing each minutely and by name, with its surroundings…If any Indian knows but little of this great world more than pertains to boundary bush and boulder, he knows his own small fighting ground intimately better than any topographical engineer can learn it. “ (R. E. Heizer, The Natural World of the California Indians, p. 205)

California tribal boundaries normally followed watersheds, which extended from hill and mountain ridges and led to creeks.  When travelers wanted to cross others’ tribal lands, they were expected to recognize tribal boundaries and request permission to enter.

About 250 years ago, two language groups existed in the San Ramon Valley, Bay Miwok and Costanoan/Ohlone.  Indians who spoke these languages lived in two different watersheds which extended north and south around Norris Canyon Rd.  The Bay Miwok-speaking Tatcan (and Saclan to the north) lived in the Walnut Creek watershed.  This watershed extends over 93,556 acres and flows north through San Ramon, Danville, Alamo and Walnut Creek to the Carquinez Strait. There were six Bay Miwok tribes identified in Contra Costa County inside this watershed (with some exceptions).

The major San Ramon Valley northern waterway is San Ramon Creek which flows through its natural channel and has some drop structures built for flood control. Evidence of Indian occupation has been found near San Ramon Creek and the major creeks which feed it including Bollinger, San Catanio, Sycamore, Green and Stone Valley Creeks. 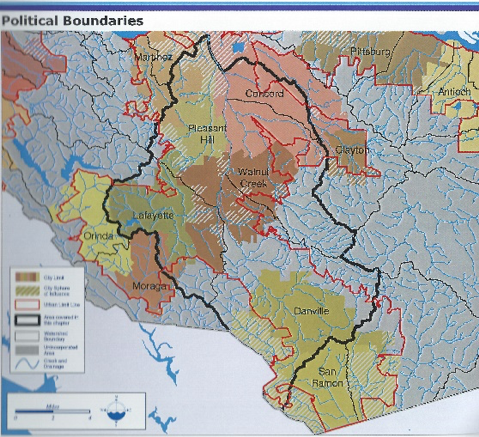 The Seunen (in today’s San Ramon and Dublin areas) and the Souyen (Dougherty and Tassajara Valleys) were Costanoan/Ohlone.  An enormous marsh once existed around today’s I580/I680 interchange which provided abundant food for them.

We know about these first people from archaeological investigations such as the ones Dr. David Fredrickson supervised during the 1960s and 1970s in Alamo and Danville.  Information also comes from Indian accounts, descendant traditional knowledge, observations by the Spanish, and academic studies in the eighteenth and nineteenth centuries.  Some of the prominent scholars who studied the California Indians in depth include Alfred L. Kroeber, J.P. Harrington, Robert E. Heizer, Lowell J. Bean and, in more recent times, James Bennyhoff, Randall Milliken, Kent Lightfoot and Beverly Ortiz.

It is interesting to note that the watersheds were followed by later settlers in the San Ramon Valley.  When two Mexican ranchos were granted, they were north and south of today’s Crow Canyon Road.  And the City of San Ramon is almost entirely in the Alameda Creek watershed, while the Town of Danville is part of the Walnut Creek watershed.