Pioneers Mary Ann and John Jones came early to California, two years before the Gold Rush in 1846.  Their trek over the Sierras was a challenging one and they managed to get to California just prior to the early snow storm which trapped the Donner family.  After living on Chiles Ranch north of the bay where Mary Ann had a baby named Josephine, the family traveled through Alamo in 1847.

She provided the earliest English description of the area in her diary.  Her husband stopped the wagon, saying  “Mary, look! Did you ever see anything so beautiful?”  She wrote later:

On every side, the valley and surrounding hills were covered with thick, velvety clover, and with wild oats standing waist high, waving and rippling in the summer breeze, like the bosom of a lake.

The Jones family lived in San Jose, then returned to Alamo in 1851 after California had become a state. They moved into an existing Mexican adobe on a hill not far from San Ramon Creek and purchased grazing rights to ranch property which extended west to the hills.  He became the first postmaster in 1852 and she served as his deputy. At the post office which was in their home, they would accept a letter and money for postage (three cents in 1853), then mark the envelope paid.

The area was named Alamo which means poplar or cottonwood tree in Spanish.   Because of its location and fine weather, Alamo grew early.  An important road from the redwoods near Moraga ran through Tice Valley to Alamo. It provided redwood for the building materials which Americans preferred over the adobe brick homes Mexicans had constructed. 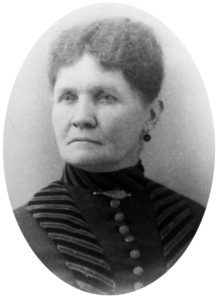 Mary Ann applied her considerable energies to schooling children and beginning a Cumberland Presbyterian church. John served as postmaster until 1861, was Master of the Alamo Masonic Lodge, became Justice of the Peace and served as County Assessor for two years.  The first county high school, the Union Academy, was built at the border of Alamo and Danville and he was a trustee during its 1859-1868 existence.

John Jones died in 1870, leaving the intrepid Mary Ann to carry on, running their 1,300 acre ranch and raising eight children. She passed away at age 93 after writing a lengthy story of their life.