A Short History of Its Beginnings 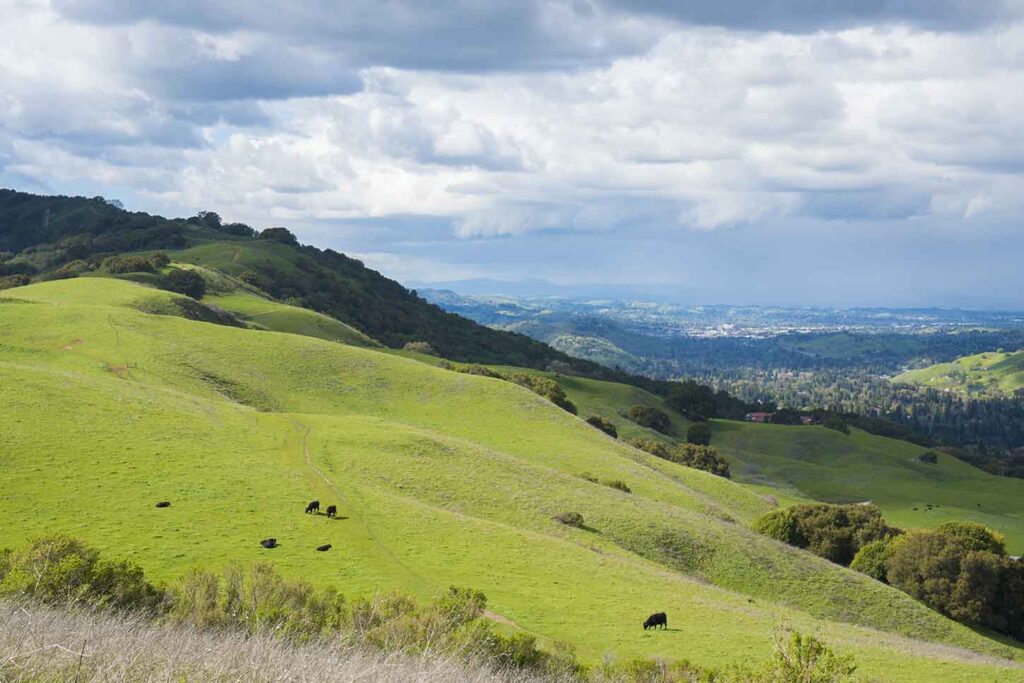 It all began in 1964, when Contra Costa voters approved the annexation of most of the County to the East Bay Regional Park District. The Park District, under the vigorous leadership of General Manager William Penn Mott, Jr., pursued voter approval for the County’s annexation shortly after a county park bond issue was rejected by the voters in 1962.

Measure “B” appeared on the primary ballot on June 2, 1964. The County campaign committee, called Citizens for Regional Parks, NOW!, spoke to anyone who would listen, wrote support letters in the newspapers and handed out campaign brochures.

Here is a portion of the Measure B brochure, showing the proposed parks for Contra Costa County:

"Not a single picnic table available in Contra Costa County," became the rallying cry of the committee which was headed by Pleasant Hill Mayor Leonard Grote. Dr. and Mrs. Clark Kerr (he was President of the University of California at Berkeley) were honorary co-chairman. Two committee area captains included Danville’s Sally Germain and Walnut Creek’s Marion McAdams with Hulet Hornbeck as the Central County Chairman.

The successful vote was 54% in favor, 46% opposed. After the celebrations were over, the work began.

Support for Las Trampas as a Regional Park

The Contra Costa Park Council campaigned hard in support of EBRPD’s annexation. Young lawyer Hulet Hornbeck was active with the Council and loved hiking various Contra Costa open spaces with his son. Several members pressed to have the District create a park in Las Trampas hills. Such a park had not appeared on the original map of parks which was publicized during the 1964 campaign.

Manfred Lindner, a nuclear chemist and active Danville conservationist, had a passion for Las Trampas; his family lived nearby and he hiked from his house. He loved the vistas, glorious oaks and quiet of the hills and valleys. Shortly after Mott became EBRPD General Manager, Lindner introduced him to Las Trampas and urged consideration of the land for a regional park. And he brought Hornbeck to see the area.

Rossmoor hikers, Lindner and Al Burton from the Park Council formed Las Trampas Wilderness Committee. Elbert Vail, who was the first EBRPD General Manager, lived at Rossmoor and came to every meeting to support Las Trampas acquisitions. The Committee promoted Las Trampas as a park by leading hikes and raising funds. "One penny would buy a square foot of Las Trampas," they wrote.

A brochure from the Wilderness Committee touted Las Trampas:

WHAT IS UNIQUE ABOUT LAS TRAMPAS?

After hearing from Hulet Hornbeck (hired by the EBRPD in 1965 to purchase regional park lands)and General Manager Mott -- and getting lobbied by the Park Council, Las Trampas Wilderness committee, the County Board of Supervisors supported using State Park bonds for Las Trampas in 1965.

Hornbeck worked with land owners and government decision-makers to balance land purchases in the west, north and central parts of the County.

Las Trampas became a top EBRPD priority. The first purchases included 480 acres from the Nordstrom brothers in 1966, 672 acres from Richard Mueller in 1969, and 313 acres from Al Kaplan also in 1969. Funds came from the State Park Bond and the U.S. Department of Housing and Urban Development.

"Las Trampas is country that we can be proud to hold in trust, unscarred, for those to follow us....Let's have a few places of which, when the final accounting is made, we can say 'Well, at least we left this spot alone, just the way nature made it.'  Las Trampas should be one of these fortunate places."

The Corduroy Hills Ranch property (1018 acres) on Danville’s west side was the focus of controversy in the 1970s. In 1937 playwright Eugene O'Neill had purchased 158 acres overlooking the valley; there he wrote his last, great plays. The ranch was planned for a large development but San Ramon Valley activists Thalia Brewer, Darlene Blair and Lois Sizoo led an effort to create the O'Neill property as a National Park. By 1976 they were successful, with the Park District’s help.

Hornbeck presented the property to the District’s Board of Directors who were interested in the open space but not the O’Neill site. So he divided the property, got appraisals of the two properties (leaving 17 acres for the site) and negotiated with ranch owner Charlotte Gerdes. In 1974 the District purchased 1000 acres from Gerdes for Las Trampas Wilderness and assigned an 18-month option for the remaining property to the newly organized Eugene O’Neill Foundation, Tao House.

Fifty years after County voters acted to join the East Bay Regional Park District, Las Trampas Wilderness and the creeks which flow from it provide stunning open space and natural experiences for the adjacent communities and the entire East Bay. In 2014 visitors come to hike, study geology, ride and bike in the park which now covers 5,342 acres. It provides a counterpoint to urban life and an opportunity for the “enjoyment of future generations” as envisioned by far-sighted advocates decades ago.