Mount Diablo and Its Name

Mount Diablo and Its Name

Mount Diablo is a prominent, beloved landmark for people in Contra Costa County and beyond. How it came to have that name is a fascinating story.  We know it was sacred to the Indians of different tribes who lived for thousands of years in view of the mountain. Some of their names have been noted by ethnohistorian Beverly Ortiz: oj-ompil-ee (Northern Sierra Miwok), supermenenu (Central Sierra Miwok), sukku jaman (Nisenan) and tuyshtak (Chochenyo).

In the early 1800s the mountain was called “Sierra de los Bolbones” by Spanish explorers and missionaries. In October 1811 Father Ramon Abella of San Francisco and Father Fortuni of San Jose explored the Delta and pronounced the mountain’s name to be “Cerro Alto de los Bolbones” – Tall Hill of the Volvon.  This title referred to the Bay Miwok Volvon Indian tribe which lived north of the mountain in the Clayton area.  Other Spanish writers spelled the name Golgone, Bolbone or Volvone.

During the early years of the nineteenth century, missionaries were actively recruiting Indians for the missions. They wanted to baptize the Natives (and thus save their souls) and they needed workers for mission orchards, gardens, livestock-tending, and domestic work. When baptized Indians fled the missions and persuasion failed to get them back, soldiers were sent to retrieve them.  In 1805 soldiers tried to capture Indians in a marsh north of Concord and, when the Indians completely disappeared into an eerie thicket in the night, the soldiers named the area “Monte Diablo” (thicket of the devil).

The name “m. de diablo” signifying an Indian rancheria first appeared on an 1824 map created by Father Narciso Duran. The English expedition of Edward Beechey in 1826 mapped the Bay and called the mountain “Sierra Bolbones”. When Salvio Pacheco petitioned for and received his Concord area grant in 1834, he named his rancho Monte del Diablo.

When the new state legislature was organizing counties in 1850, they considered naming this area Mount Diablo County. Mariano Vallejo wrote that “both branches of the state legislature, after heated debates on the subject, resolved upon the less profane one of Contra Costa.”  In 1851 the mountain’s summit became the base point for U.S. land surveys of central California and Nevada. 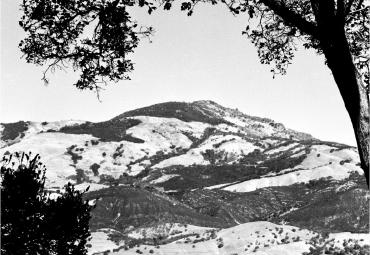 Today we view the mountain’s name as settled and acknowledge the name’s beginnings in that north Concord marsh.  But the name does seem to draw controversy. Bret Harte wrote a fictitious essay in 1863 which told about a missionary’s battle with the devil in the guise of a bear, after which the father named the mountain for the devil. In the 19th century a local Congregational Church wanted to call the mountain Kahwookum which they said was an Indian name meaning “Everywhere Seen.” This name has come up several times including when a journalist in 1916 said the mountain should be Koo-Wah-Kum. As recently as 2005 an Oakley resident unsuccessfully petitioned the U.S. Board of Geographic Names to re-label it Mount Kawukum. No evidence for such an Indian name has been found.

The name Diablo appears throughout northern California in schools, school districts, ships, housing developments, foot races, streets, businesses and magazine names. In the San Ramon Valley, Diablo Country Club is named for the mountain. The name is here to stay.

On April 23, 1978, the summit was recognized with the California Historical Landmark Number 905.   The San Ramon Valley Historical Society assisted with the dedication and also gave this landmark the SRVHS plaque # 6.