1848
What Was Life Like?
Gold and the Harlans of San Ramon - Part II 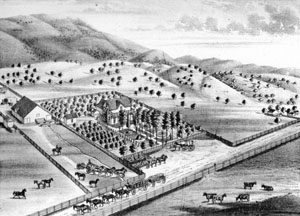 The gold rush and gold fever transformed California in two short years. And the Harlans were there at the start. Joel Harlan, one of the San Ramon Valley’s early settlers, learned about the discovery of gold from his good friends, the Wimmers, who were in Coloma when gold was found Jan. 24, 1848.

In April 1848, Joel and his cousin, Jacob Harlan, were running a livery business in San Francisco when they received a letter from their “Uncle Peter” Wimmer. He told them about the placer gold discovery and urged them to come to Coloma to mine immediately.

In his book California 1846-1888, Jacob wrote, “It upset all my business plans. I caught gold fever at once, and notified my wife and my partner Joel that it was time to give up livery stable keeping and go to the mines.”

The Harlans were among the first to hear directly of the discovery, because Sutter was trying to keep it quiet. The news was printed first in The Californian on March 15, 1848.

The Californian article read “Gold Mine Found. In the newly made raceway of the Saw Mill recently erected by Captain Sutter, on the American Fork, gold has been found in considerable quantities.” This announcement did not elicit much attention at the time.

In May, however, a dramatic action by young Mormon Sam Brannan really set off the gold rush frenzy. He was an energetic entrepreneur with a store in New Helvetia (Sacramento). After being paid in gold by talkative local miners, he became convinced that the gold discoveries were legitimate and took steps to make money from the find.

He stocked his store with all the merchandise he could get, went to San Francisco on May 12, 1848, and waved a bottle of gold dust in his hand, yelling “Gold! Gold from the American River!” Many historians mark the real beginnings of the California gold rush from that day.

That spring, Joel and Jake and their young wives left the livery business in San Francisco to set up a store in Coloma. According to Jacob, Joel put their horses to pasture at Squire Elam Brown’s (in Lafayette) while he got a stock of goods “suitable for a store or trading post at the mines. Joel was a doubting Thomas and did not understand how we were going to start a store with five hundred dollars, which was our capital.”

William Leidesdorff, a prominent landowner and civic leader in San Francisco, was a friend of the Harlans and agreed to advance them the money. Jacob said, “My purchases that day amounted to $4,500, for all of which Leidesdorff made himself responsible.” Harlan bought the things miners would need: groceries, flour, beans, liquors, dry goods, shoes, tools, shovels, picks, tin pans, kettles and ammunition.

They took Capt. John Sutter’s launch up the Sacramento River and hired two ox teams in Sacramento to get to Coloma. Jake turned down an opportunity to be a partner with Sam Brannan “being already in partnership with Joel.”

Their Uncle Peter, still working on the sawmill, put them up in Coloma until they built a cabin. They found the miners would pay whatever “we demanded for our goods”: flour cost $1 a pound, coffee $1.50.

Jake made money selling colorful cloth with holes cut out as sarapes to the Indians. Jake said, “They had much fine gold which they carried in vulture or goose quills.” They loved the sarapes and were not stingy. In one day, two bolts of fabric brought $1,200.

The Harlans weren’t the only Californians to take off for the mines in 1848. Writers tell about the deserted streets and unfinished jobs in San Francisco, San Jose and Monterey. One young man wrote, “My own business of surveying, like all others, was knocked in the head last spring, and I was left to suck my thumbs for a livelihood or go with the multitude.”

Gold fever spread from California to the world as forty-niners arrived from Mexico, Europe and China.