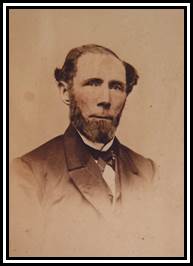 American pioneer James Witt Dougherty was important in both Contra Costa and Alameda Counties during the early years of American statehood.

Dougherty came to California first in 1849 with other forty-niners and opened a business in Sacramento. He returned briefly to Mississippi and moved to today’s beautiful Tri-Valley area in 1852 with his wife Elizabeth and children.

At one point he was the largest landowner in the Tri-Valley, with most of that land purchased from two Mexican rancheros -- 10,000 acres from Jose Maria Amador and 7,000 acres from Francisco Alviso. Both men had problems with settlers living on their ranchos without acknowledging that the land was owned by them. Dougherty’s holdings went as far south as today’s Alviso Adobe and included today’s Tassajara and Dougherty Valleys.

He tackled the challenge of removing squatters by organizing an eviction crew. By this time, settlers had lived there for several years, built houses, planted orchards; many were armed and “were in no mood to be pushed around” according to one early source. With his ownership established, immense cattle herds were marked with the DG brand. In later years he worked on improved breeds of horses and raised Clydesdales and Normans.

The Doughertys lived in the large Amador adobe next to Almadilla Springs in Dublin until the 1861 earthquake destroyed it. Initially the Dublin crossroads (today’s San Ramon Road and I-580) was known as Amador’s, then became Dougherty's Station. A post office with that name was established on February 15, 1860. Dougherty served as Alameda County Supervisor for the eastern part of the County (called Murray Township) in 1855, 1856, 1857 and 1859.

Evidently Dougherty had said at one point “There are so many Irish here, you might as well call it Dublin.” And indeed local leaders eventually named the crossroads Dublin.  The Dougherty family was Scots-Irish and Protestant; they had immigrated to American around 1730.The pioneer Dublin Cemetery includes a prominent Dougherty family plot; he donated the western section of the cemetery as a non-sectarian burial area.

Amador’s rancho lands came to be called Dougherty Valley in Contra Costa County and were ranched for over 100 years. During that time, land was leased by several ranchers who grazed cattle and raised hay and grain crops. Bud Nielsen and his TN Cattle Company were the primary ranchers for 50 years until development began in 2004.

Six thousand acres of the Dougherty Valley were purchased by Shapell and Windemere Homes and, after some complex litigation was settled, 9-11,000 dwelling units, parks, schools, businesses and public buildings are planned for the area.

Contra Costa County and the City of San Ramon plan the valley’s development and it becomes part of the City.