Happiness is a Freeway to the San Ramon Valley 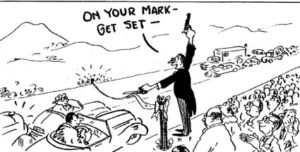 This headline appeared in the Contra Costa Times in December 1964: “Happiness Is a Freeway to the San Ramon Valley.” Reporter Donald Brand wrote, “it’s a time for great joy and jubilation (because) one of the Bay Area’s worst continuing traffic jams is over.” The new freeway from Walnut Creek to Danville had just opened.

After World War II, California’s population swelled, and young families looked to the East Bay for affordable homes. A 1940 Valley population of 2,120 grew to 41,095 people in 1975 as the San Ramon Valley’s new homes spread out on both sides of the Interstate 680 freeway.

In earlier times, rural roads crisscrossed the valley leading to the small downtowns in San Ramon, Danville and Alamo. People came into town to get their mail, shop at the general stores, attend dances at the Veterans Hall or events at the San Ramon Hall. State Highway 21 was the north-south arterial, following the original San Jose to Martinez road.

After 1945, the drone of cars on the old highway that went through downtown Danville and Alamo became a constant. Drivers came to dread the bumper-to-bumper two-lane road through the San Ramon Valley. When President Dwight Eisenhower signed the bill creating the National Highway System in 1956, the Valley was ripe to host the East Bay’s inland freeway. Residents were eager to send through traffic off the Danville highway.

In Alamo it was logical to place the road just east of Alamo’s downtown, though much work on San Ramon Creek was needed. A major archaeological dig found Indian village artifacts that were dated to 5,000 years ago.

Where in Danville? Some wanted to put it a mile or more to the agricultural east, where there were few buildings and the existing community wouldn’t be severed. But this plan would have affected the new Aerojet-General Nucleonics plant in San Ramon. Chamber of Commerce meetings argued over the route, finally advocating the mid-valley way. The Danville segment went east of Old Town and over the Southern Pacific tracks.

There were debates over the name of one new road, which finally was called El Cerro. In 1962, a controversy over the Diablo Road access in Danville erupted; people objected to losing several mature oak trees when the off-ramp was planned. One anonymous phone call threatened a boycott of Danville merchants over the issue when the Chamber supported the off-ramp location.

Everyone talked to the Congressman who represented the valley, John Baldwin. He had grown up in Danville and was the Representative from 1955 to 1966. Since he served on the Congressional Public Works Committee, his opinions were influential. He and Assemblyman Don Doyle were involved in selecting the final freeway alignment.

After the right of way was finalized, contracts were let and the freeway built. The first 6.75-mile segment from Walnut Creek to Sycamore Valley Road was built by the Guy F. Atkinson Co. for $13.7 million. This stretch of I-680 was completed in 1964.

Alamo’s Warren Scolin chaired the celebration committee, which sponsored a three-day event called “Frontier 680.” Ninety-year-old Claude Glass cut the ribbon, and Bill Hockins was Grand Marshall. Four parachutists landed on the new freeway and a parade with bagpipes, antique cars and Congressman Baldwin proceeded down the freeway on Sunday, Nov. 1, 1964.

Christmas came early as travel on the Danville Highway was transformed to a quiet, meandering drive once the new I-680 freeway opened.