Part 4 – Danville Overcomes Hurdles to Get on the Ballot

Who's in Charge?
Danville Overcomes Hurdles to Get on the Ballot (Part 4) 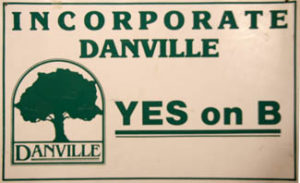 In 1980 and 1982 activists worked hard to get a Danville-only boundary, so that voters could approve or reject a new Town. The Local Agency Formation Commission (LAFCO) was the only agency which could approve such an incorporation effort. Composed of two members selected by the County, two selected by the cities and one selected by the other four, it was tasked with discouraging urban sprawl and encouraging the orderly development of local governments.

The LAFCO executive officers took this charge very seriously. Since the Commission’s creation in 1963, they had opposed allowing individual San Ramon Valley communities to vote on incorporation. Joe Connery, LAFCO executive in the 1970s, had successfully persuaded earlier incorporation committees to include the whole valley in any proposed city boundary. There were good reasons for this position since the valley shared a unified school district, was sociologically and economically similar, and included the entire southern part of the county.

Nevertheless, there were four failed efforts in recent history and the Danville Incorporation Study Group (DISG) committee wanted a Danville vote. The LAFCO executive officer after 1979 was Dewey Mansfield and he took the same negative position. He emphasized the difficulties of organizing an incorporation effort (“you have to suffer!” he said to one volunteer) and asked for extensive data which would prove the proposed Town of Danville could succeed.

The county was not forthcoming with budget figures, especially when dealing with citizen activists. Finally the committee decided to raise funds and pay Maynard Crowther of Danville to put together the proposed Town budget. “The Town of Danville, A Feasibility Study, May 1981” brought solid findings that the proposed town could successfully finance government services and cited many reasons for allowing Danville’s citizens to vote on incorporation.

The boundary was the subject of much discussion and debate during the writing of the Study and finally the committee decided to follow Danville’s zip code, plus the entire Crow Canyon Country Club south to Crow Canyon Road. Dick McNeely was the point person on this, talking to the San Ramon Incorporation committee (which was about 8 months behind Danville), Blackhawk Corporation representatives and White Gate and Bryan Ranch homeowners.

At the same time, the committee, with the assistance of Supervisor Eric Hasseltine, convinced the Board of Supervisors to put the issue to a ballot without the elaborate petition method which had taken such energy in the earlier attempts.

The Committee armed itself with the Feasibility Study and a complete paper on CEQA Compliance: The Proposal to Incorporate the City of Danville. Then members lobbied the Local Agency Formation Commission members. Despite Mansfield’s desire for a valley-wide city, the Commission was persuaded that Danville should have a chance to vote for incorporation on its own. Mansfield finally recommended that Danville have the opportunity, with the caveat in his report that Danville should be the only city in the valley. His theory was that San Ramon and Alamo could later join Danville.

LAFCO approved the proposal on December 9, 1981, and, when the Board of Supervisors set the election date for June 8, 1982, the advocates celebrated and launched the next phase, an election campaign.

Next week the Danville election.

The Museum of the San Ramon Valley has extensive files on the Danville incorporation effort.