Who's in Charge?
Danville Voters Create a New Town (Part 5) 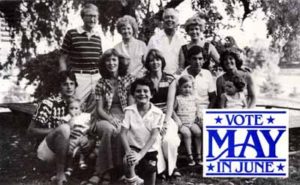 The first six months of 1982 were lively ones. The Danville boundaries were in place and twelve candidates signed up to run for the Council on June 8. A “yes” vote on Measure B would approve what the ballot titled “Danville Incorporation.”

The YES ON B campaign set up a Steering Committee with Dick McNeely as Campaign Chairman and Carla Berg Nelson as Campaign Coordinator. A long list of other people took responsibility for different campaign jobs, including area chairmen in nine neighborhoods. Signs with “Incorporate Danville, Yes on B” dotted front yards.

Candidates met with the campaign committee to get details on the incorporation proposal, since most of them had not been involved in incorporation planning. In an unusual example of cooperation, they all agreed not to use individual political signs because of the expense and unsightliness. Most candidates participated in a mailer which promoted incorporation and introduced each of them. This cut the costs of mailing for everyone.

The candidates were: Bob Hussey, Boyer August, Susanna Schlendorf, Kyle Meintzer (who opposed incorporation), Doug Offenhartz, Alice Brydon, Beverly Lane, John Maloney, Dick McNeely, Al Guzman, John May and Tony Stepper. John May’s snappy slogan was VOTE MAY IN JUNE. John was 20 years older than most of the candidates and he and wife Margaret had been active in Danville since 1951.

Opposition to the YES ON B campaign was presented by a committee which organized as The People Against Incorporation of Danville. They sent out flyers questioning the costs, produced catchy negative cartoons, opposed “another layer of government” and asserted that Danville would lose its entire CHP enforcement. The week-ends before election, prominent “NO INC” signs appeared all over town, many planted in the public right-of-ways. The signs promptly disappeared in the night.

Incorporation efforts often involve people who see their task as “educating the voter.” They soon discover it is really a political campaign to persuade voters to vote “yes” and to raise funds to get the message out. Because many voters don’t read the local newspapers, money for printing and postage are essential. The rare person enjoys asking for money, so fundraising was a real challenge for the campaign.

Leadership provided another challenge as some of the incorporation volunteers decided to run for council. Non-candidates were needed to run the campaign itself. At the same time it was clear that candidates knowledgeable on incorporation were the best emissaries to the voters. The candidates walked neighborhoods and touted both incorporation and their own qualifications; these efforts in the hot summer sun helped Measure B succeed.

When the ballot arrived, it included an explanation of the proposal by LAFCO officer Dewey Mansfield and arguments for and against Measure B. The YES and rebuttal arguments were signed by Chris Winter, Carla Nelson, Gay Wyne, Maynard Crowther and George Filice. M. B. Frazier signed the arguments against.

June 8 was election day and the final certified vote brought victory: yes, 5809 and no, 4952. Of 16,936 registered voters, 10,761 voted. While some said the margin of victory came from voters who lived in the San Ramon zip code north of Crow Canyon, the final success did not depend on their positive votes.

The new Town Council was John May, Beverly Lane, Dick McNeely, Susanna Schlendorf and Doug Offenhartz. Al Guzman was 78 votes behind, in sixth place. After some well-deserved celebrating, the council set to work with less than a month to take over government services. The council hired an interim manager George Gaekle, negotiated with the county and was sworn in on July 1, 1982.

A gala installation celebration was planned that night at the Education Center. The ceremony was opened by County Supervisor Robert Schroder, Rev. Martin Werfelmann of Immanuel Lutheran Church gave an invocation and the colors were presented by Boy Scout Troop No. 36. The Council was sworn in by Judge Max Wilcox and John May was elected the first Mayor. Several presentations were made, including one by Jim Eastman of Eastman Printing who gave Howard Fite’s Danville logo design to the Town. Raydean Randlett coordinated the event and handsome program. Celebrants asked Council members to autograph the program -- which was definitely a new experience for all of them.

For the incorporation advocates and the five elected council members, the events of 25 years ago were among the most memorable of their lives. The anniversary will be marked with an exhibit in the Danville library in July and August and a celebration at the new Oak Hill Community Center in September.