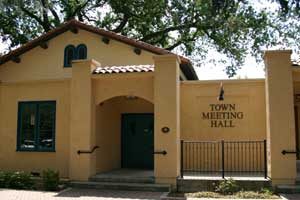 Danville’s Town Council and commissions meet regularly in a historic building on Front Street, called the Town Meeting Hall. This building led many lives in its fifty years before it became the Hall. Front Street was Danville’s original main street and the Danville Presbyterian Church (1876), a handsome steepled church, once stood on the site. A huge redwood tree near the church has a plaque stating that the tree was planted in honor of the first pastor, Rev. R. S. Symington.

One windy night in 1932, the landmark church burned to the ground, almost taking several nearby buildings with it. Jim Root saved some items from the church office, one being the original minutes for San Ramon Valley High School which were singed.

Under the leadership of Nellie Baldwin, the church was rebuilt in a Spanish colonial style with a tile roof, arched windows and stucco walls. Margaret Baldwin Wildenradt recalled that people criticized her mother for not re-building the steepled church, but the insurance funds of $4,500 didn’t allow that.

Pioneer descendant Wilson Close recalled the building’s church history from 1933 to 1951. Ann Wiedemann and Al Kaplan were the last couple to be married in the old church. As the congregation outgrew the building, Close said they purchased five acres on El Pintado Road and completed a new church in December of 1951.

Local philanthropist Betty Englehart purchased the building and, from 1951 to 1955, it was the site of the Danville Youth Center. Danville’s population was growing quickly and programs for teens were needed. A board composed of individuals, service club and homeowners’ association members supervised the programs. High school student Ken Sandy worked there in 1951. He said it was his first paid job -- 35 cents an hour. Clubby LaCroix, a former world-class tennis player who had run tennis clinics in Danville, became director of the center. Sandy recalled handing out badminton and volleyball equipment and pool cues. He also said he’d carved his girl friend’s initials on one of the beams.

From 1955 to 1984 the building became a school for retarded children. Mrs. Englehart offered the building to a group of parents for $1 a year as long as it was needed. That first summer parents scrubbed, painted and fixed up the building and, in September, thirteen mentally retarded preschoolers arrived. The teacher was Lynn Scarlsboro, for whom the school was eventually named. By 1962, Betty Englehart was so pleased with the program that she donated the building and land to the Council for Retarded Children.

At the re-dedication, Elree Langford, parent of a Downs Syndrome child and former teacher at the school, recalled “During the time Lynn Center was located in Danville, the support from the merchants and community was just wonderful. Each year Root’s would have us for Christmas dinner and, when they went out of business, the Elegant Bib in Alamo continue the tradition. Mr. Whalin from the Danville mortuary played Santa and always provided each child with a gift. When the firehouse was around the corner, we were always welcome. When we passed the barber shop, we always got a sucker…One special group continues to support the Lynn Center, the Grandmother Go-Getters Club of Danville. They were just delightful and they remember us every year.”

The Zion Fellowship Church was the next owner (1984-1988). Elaine Collins said that she knew the building well when it was their Sunday School. “We often joked when we came in on a Sunday morning whether we would find puddles on the floor from the roof leaking, whether we’d be able to get the heaters warm enough to get the little bodies warm.” Yet “for hundreds of us who made use of their facility, we have a very warm place in our hearts for it. I can hear little voices ringing out and songs being sung as the children came each Sunday morning to learn God loved them and cared about each one of them.”

“I’m very pleased that the Town of Danville purchased the building and so lovingly rehabilitated it, so that it will be available once more for public use. A big part of our heart stays with it.”

Sources: oral histories and archives at the Museum of the San Ramon Valley.
This article first appeared as a column called Presenting the Past in the Danville Weekly.