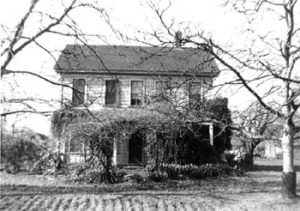 The name “San Ramon” is one of the oldest in the San Ramon Valley, although it took several decades before this name was firmly established. An 1885 county map labeled the village as “Limerick.”

Jose Maria Amador, whose rancho included most of San Ramon with a headquarters in Dublin, explained the origin of the name in an 1855 land case. He testified, “The name was given it (the creek) by a mayor domo (of Mission San Jose) by the name of Ramon who had the care of some sheep there a long time ago.” He then stated that “San” was added to Ramon’s name to conform to the usual way Spanish names appeared. Ramon was a mission Indian whose homeland was probably in the East Bay and who would have been named for St. Raymond.

The village itself was first known as Brevensville for Levi Breven (Brewin), who was a blacksmith. Frequently places were named for a person whose shop or skill was important to the area, and the blacksmith’s trade was essential to early ranchers.

The next name was “Lynchville” for William Lynch, an energetic early pioneer who came to the Valley in 1850 as a young man and helped Leo Norris build the first two-story frame house in San Ramon. A skilled carpenter, he was prominent in the valley for many years as a rancher and farmer. He and his wife Mary Norris Lynch raised seven children in San Ramon.

“Limerick” appeared on the map when settlers from Ireland moved in. As the Irish famines of the 1840s devastated that country, visionaries in Ireland promoted California as a haven for immigrants. In 1845 one Irish priest, Eugene McNamara, petitioned the Mexican government asking for land in California. He wanted to bring 2,000 Irish Catholic families—as a barrier against invading “Methodist wolves” of the United States—according to Kevin Starr in “Americans and the California Dream.”

While that petition went nowhere, the idea of available land in California drew many European immigrants from cities in the east. By the 1860 census, 20.4 percent of the foreign born settlers in Contra Costa County’s Township Two were Irish.

A San Ramon post office existed in the 1850s but closed in 1859; it was re-established on Dec. 4, 1873. In 1882, historian J.P. Munro-Fraser wrote that the name “San Ramon” was the one “given to the Post-office at what is usually known as the village of Limerick.” A new park on Bethany Road in Dougherty Valley is called Limerick Park in honor of this history.

Only when the railroad arrived in 1891 was San Ramon’s name finally established. The railroad’s formal name was the San Ramon Branch Line of the Southern Pacific and from 1891 to 1909, it was the terminus of the line. When the line extended to Pleasanton in 1909, San Ramon was no longer known as Limerick. Today San Ramon is a thriving young city and can proudly claim one of the older city names in California.