Settles on a name 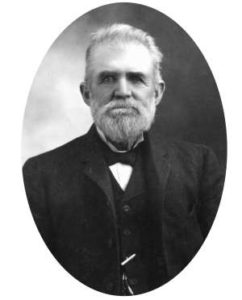 Picture the early settlers sitting down after a long day and a hearty dinner, talking over a cup of coffee. They discuss the way the area is changing and growing. In addition to a blacksmith shop, there is now a wheelwright store, a hotel and general store.

People were saying the community needed a name.

Daniel and Andrew Inman were two of the people talking, along with Grandma Sarah Young. Perhaps some others were there, too. The community to the south had been called Brevensville for several years, after a local blacksmith. How about Inmanville? Both brothers rejected that.

Young had another suggestion: “Danville,” after her hometown of Danville, Kentucky. That made sense—it put a little of Dan Inman into the name and brought a fond memory of home to the older woman who was Andrew Inman’s mother-inlaw.

Danville, it would be.

This hypothetical koffee klatch provided the gist of a letter written by Daniel Inman to the Danville Sentinel in January 1898.

The Inman brothers were a Gold Rush success story. Like many other young men from the Midwest, they came to California to make their fortune gold mining in 1849, when Dan was 21. The brothers had been raised on an Illinois farm where Daniel had been trained as a cooper. With their earnings they purchased a boarding house in Sacramento, which was flooded out. Andrew settled on a farm near the future Danville in 1852. Dan came in and out of the valley and did well at hydraulic mining in El Dorado County.

Finally, in 1858, Dan returned to the Valley to stay. According to his letter: “I came into the Valley once more—this time for good—and purchased a farm, where Danville is now located, of a man named Pigmore. I went to farming and seeded the lands with wheat that winter.” In 1863, he married Josephine Jones, a daughter of one of Alamo’s pioneer couples, and moved to Livermore with his friend William Mendanhall in 1865.

In Alameda County, they became community leaders. He and Josephine helped found the Presbyterian Church in Livermore. He served as County Supervisor from 1867-68, was elected to the State Assembly in 1869, was the first Livermore Grange Worthy Master and was an elected representative to the convention that revised the original California Constitution in 1878-79. He also served as the president and manager of the State Granger’s Association and store in San Francisco. An advocate for the railroad and for reasonable rail rates for farmers, Daniel Inman was known for his integrity.

When Inman died in 1908 at 81, he was the father of seven children, well known and honored in Livermore and the Valley. A school and a street in that community were named after him. As a young man in Danville and a leader in Livermore, Daniel Inman left his mark on both valleys in the 19th century.