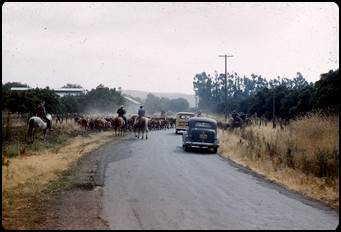 There are still ranches in today’s modern San Ramon Valley with the traditional challenges of drought added to new ones related to suburban development. Cattle graze in the Tassajara Valley, in Crow Canyon and on East Bay Regional Park lands. Often successful ranchers own properties in other parts of California or Oregon which gives them flexibility in moving their stock.

In the early years, cattle were driven directly to slaughter houses from local ranches. Eddie Canton, who worked for Hap Magee, said that in the forties “I would drive cattle from Mount Diablo down Danville Boulevard, then through Crow Canyon to Hayward and into what’s now called Union City, to a slaughterhouse there. It would take three days.” (SRV Herald 1984)

Herds ready for sale were directed down Tassajara Road from both directions to the Wood Ranch cattle scale. According to Don Wood, “Roger Podva of Danville was one of the “country buyers” (agents for slaughter houses) that bought cattle over this scale.” (Wood, 1988)

One crisis that confronted the stockmen was the hoof and mouth plague of 1924, when losses over the state ran into millions. Some of the most valuable herds in the San Ramon Valley were attacked, and a quarantine was established from Danville to the county line. The epidemic was felt throughout the state, with Contra Costa County third in total losses with a $233,764. (Rutherford)

Annual round ups and brandings were an essential part of raising cattle. Ranchers vaccinated, branded all calves, and castrated the males. People came from all over to watch the brandings, do some roping and enjoy themselves. All this work was followed by a potluck and barbeque. These gatherings were a welcome break in what seemed to be unremitting work for ranch families.

Wiedemann Ranch branding
The ranching lifestyle may be seen as a romantic one, with cattle dotting the landscape and horseback rides into the hills. But hard work and uncertainty come with the life. Cattlemen and their cowboys tended the cattle (feeding and watering, breeding, vaccinating, branding), decided when to buy and sell the stock, built and took care of fences, fended off intruders (both people and animals), all while relying on decent rainfall to make a profit. California’s periodic droughts were a nightmare for ranches and farmers.

The Tri-Valley, with its weather and cattle forage, is premier cattle country, according to Sunol rancher Tim Koopman. Pat Flanigan said that the burr clover at The Blackhawk made that ranch the best in the west for raising cattle.

Ranching in the Modern Era

When the interstate freeway opened in the mid 1960s and property owners were taxed on the “best use” of the land, the ranching era drew to an end. In a newspaper interview, Jeff Wiedemann said “The only reason there are houses in the San Ramon Valley is that ranchers got squeezed out.”

New residents arrived with different attitudes toward farms and ranches. Orchard crop dusting came to an end. Tractors were vandalized when left out, people cut fences letting cattle loose, teen-agers drove over the land doing wheelies, and dogs chased the livestock. The new folks said they valued the open space and clean air but many of them didn’t acknowledge that these agricultural lands were private property. 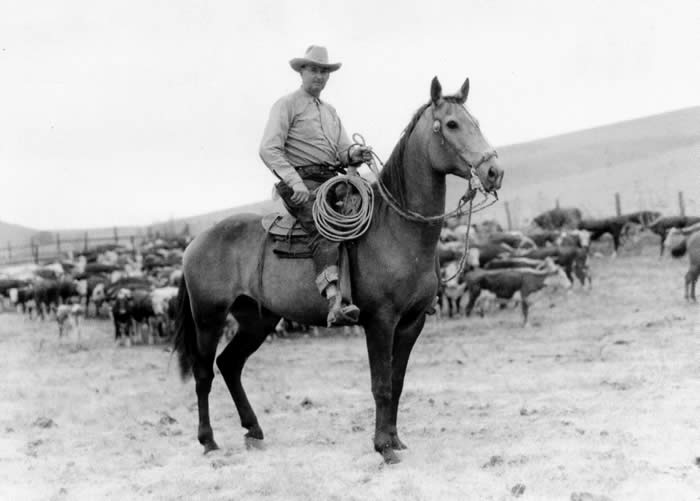 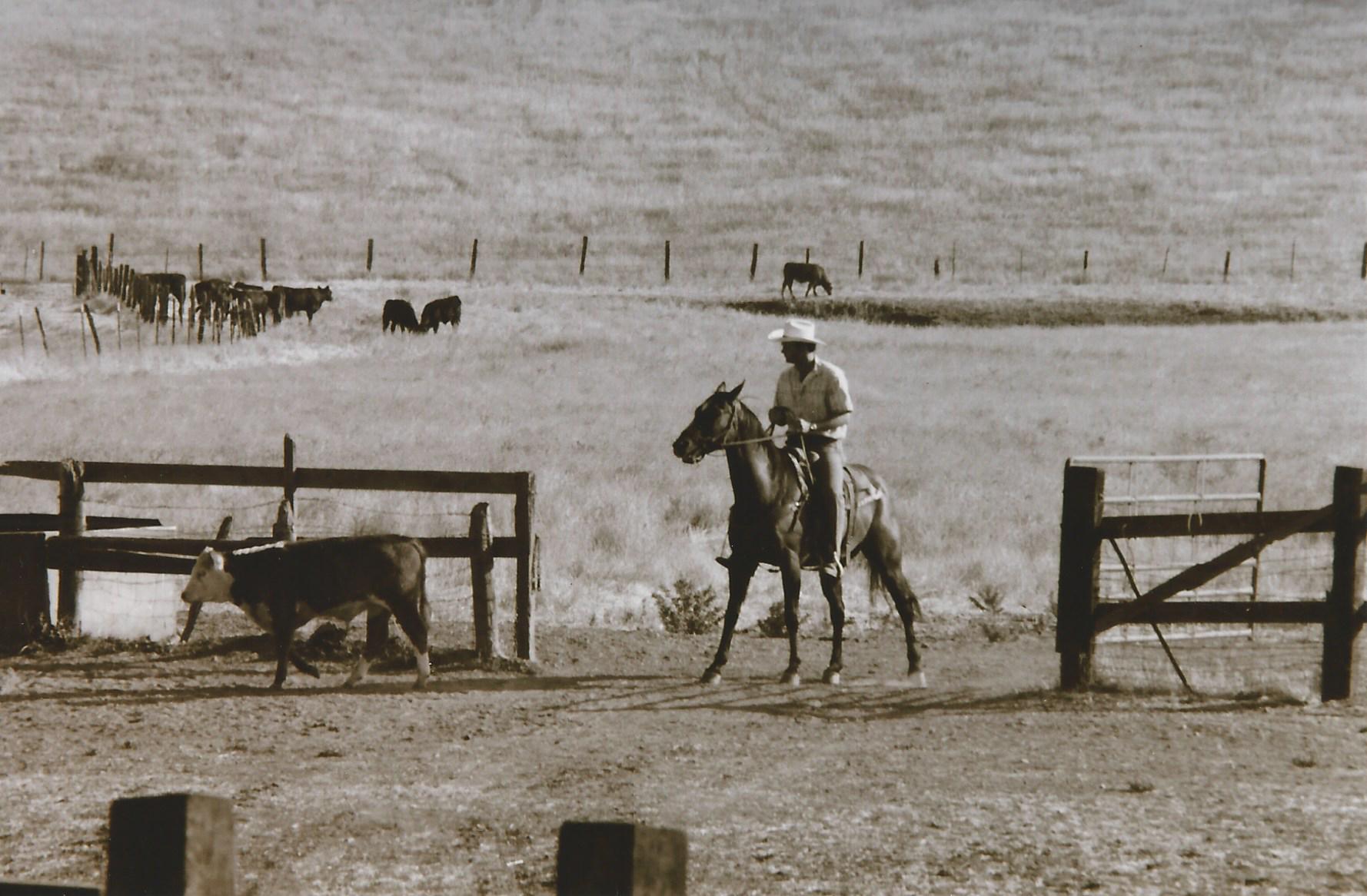 The ranching support system also declined. With development, stores which sold parts, chemicals and basic ranching supplies moved east to the Central Valley. Traffic came with suburban development and modern roads are no longer available for cattle drives; today cattle are loaded on trucks for transport.

Ranchers coped by selling land for development near the freeway, putting conservation easements over their property and running cattle on EBRPD lands. With few exceptions, East Bay ranchers today make their living away from their ranch and don’t depend on ranching for their main income.

The drought of the mid-seventies was a final straw for the Wiedemanns as grass for the cattle dried up. Accepting the inevitability of development, they sold land (now Twin Creeks) to Dame Homes, acreage on the eastern hills (now Canyon Lakes) to the Blackhawk Development Corporation, and part of their original ranch off Norris Canyon Road to Toll Brothers.

The Elworthys, Rasmussens and Wiedemanns do continue to ranch. And these families have reconciled to the changes. Ann Wiedemann Kaplan said in one interview: “It is too bad that it is all being developed, but what can you do? It is a beautiful area with wonderful climate and you can’t fault people for wanting to live here.” (SRV Herald, 5-8-1990)

In 1900, the San Ramon Valley was a mere 2727 people with small villages, farms and ranches covering the landscape. By year 2000 the area had been reshaped by housing developments, retail centers, Bishop Ranch Business Park and two incorporated cities. The 2010 valley population was 141,646.

While grazing exists in the Regional Parks and on some valley properties, most working ranches have moved east as development occurs. The impacts of post World War II growth and the vagaries of weather have transformed cattle ranching.

But the memories remain. Valley families recall the joys of ranch life, the hard work, the waving green spring grass, annual brandings and barbeques, and the neighborliness of a past era. In 1991, ranchers like Gordon Rasmussen affirm “This business gets in your blood. Even in tough times, when you could make other moves, you still get a kick out of it.”

Rutherford, Richard, “The $$$ Trend, Red and Black, A History of Agriculture in the San Ramon Valley,” The Valley Pioneer Centennial Edition, 9-4-1958.

-------, The Wood Ranch, Materials prepared for a CCC Historical Society tour of Wood Ranch in 1988