San Ramon pioneers wanted their children to be educated and began schools soon after coming to the area.

In the 1882 History of Contra Costa, it states that an early San Ramon school was built in 1852 at the “foot of the eminence which is known as Cox’s hill, near the village of Limerick (San Ramon).”  Other early San Ramon schools are mentioned: one near a clump of oaks on Leo Norris’ land taught by Sylvester Degan and, in 1856 or 1857, a school near the Glass store in San Ramon. There were also home tutors at the Norris and Harlan ranches.  James Smith recalled one teacher Miss Everett from Stockton in the 1850s, who used to read a chapter for the Bible and pray; she had some problems with the older boys and “would shed tears because of their conduct.”

One election for $1000 failed to fund a new school in September of 1864. Then, on October 27, 1866, voters supported a tax of $2000 to purchase land and erect a new school house. This classic and well-remembered San Ramon Grammar School was built in 1867 and served the community until 1950. Ebenizer Dole, a carpenter, built the all-wood San Ramon School which measured 46 X 26 feet in dimensions, had a 13-foot high ceiling and an impressive bell tower. There were two rooms with grades 1-4 in the smaller room and 5-8 in the larger. Albert J. Young taught at the new school, from 1867-1869 and returned to teach from 1873-1877.

“The building is one among the neatest and best arranged school houses in the county,” according to a writer for the Contra Costa Gazette in 1874. 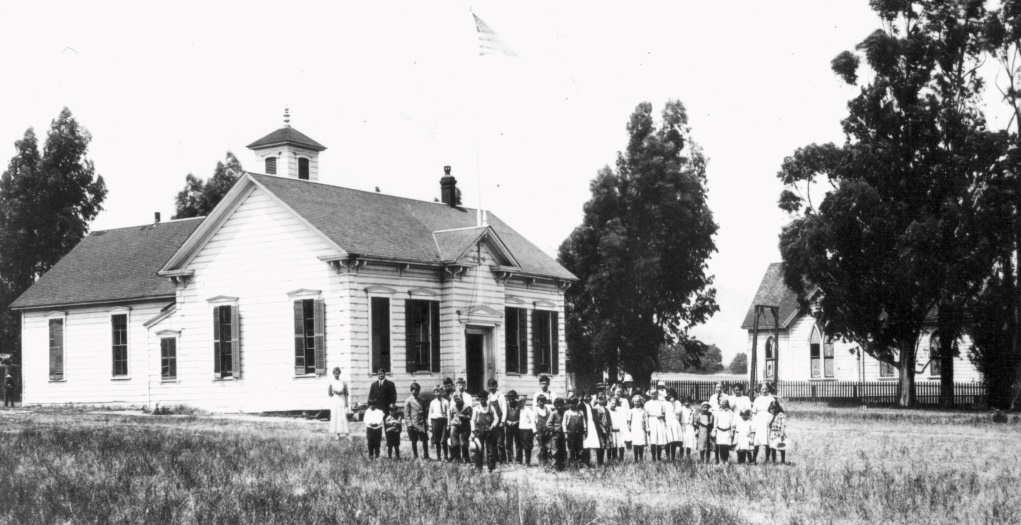 In 1874 the trustees were W.W. Cox, George McCamley and Mrs. J. O. Boone.  The boundary between the Danville and San Ramon grammar school districts were established between the Meese and Baldwin properties in 1880. Meese’s property is today’s Greenbrook Homes. A trip to the Midwinter Fair by school students in 1894 was reported in the Gazette at length.

The San Ramon School provided schooling and a social center for the community for 83 years. It was the only large space available in the village until the San Ramon Hall was completed in 1911. In memoirs Howard Wiedemann and Leo Lynch remembered removing the school’s central partition for events and parties. The building was used to celebrate May Day, provide flag ceremonies, hold spelling bees, and host meetings, graduations and parties. 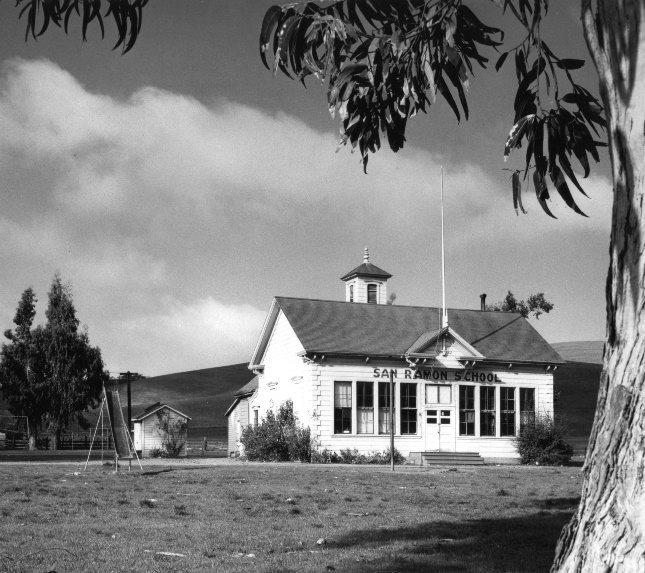 The school was enlarged in 1876. During the 1890s enrollment hovered around 110 students. In 1896 the school grounds were beautified by the San Ramon Public Hall Association. These improvements included: a new fence and stile on the south side; rustic seats throughout the grounds; an awning for the girls’ yard, and a ring and bars for the boys.

After the Danville Union School District was created and a modern four-room school was built in 1922, the San Ramon trustees discussed joining that district. In 1945 farmer Roger Schulte, an educator, and Rancher Fred Wiedemann debated the issue again. But San Ramon stayed with its own district until 1964 when all valley grammar and high school districts unified.

A new school, the second, was built in 1949 and opened in 1950 with three rooms at the start. The original school building was razed in 1960 with Bill Fereira taking time to save the steeple.

On May 17, 1997 a plaque from the San Ramon Valley Historical Society was placed on San Ramon Valley Blvd. north of Fostoria to mark the location of the long-lasting and well-loved original San Ramon Grammar School.