Today the Alamo Cemetery is a quiet wooded spot on the border of Danville and Alamo not far from the San Ramon Valley United Methodist Church on Danville Blvd.  However, in the 1850s there was plenty going on.

Located midway between the small downtowns of Alamo and Danville, in the fifties there were annual religious camp meetings, two schools, a church and the cemetery.

Several religious camp meetings were organized and managed by Mary Ann Jones and others in the early 1850s.  In her biography Mrs. Jones stated that people decided to host a camp meeting which they hoped would lead to the building of a church.  She wrote that the first camp meeting lasted ten days and “people came from every place in reach.”  James Smith later recalled people coming from Santa Clara, Napa and Sonoma counties.  He said the meetings were full of religious fervor and included three daily services, four or five preachers (described as “wonderful exhorters”) and baptisms in the valley’s best swimming hole on San Ramon Creek.

In 1856 twenty-year old Bret Harte came to the camp meeting when he was a tutor for the Bryant boys in the Tassajara Valley.  A devout Christian concerned that his four sons not grow up “like range cattle,” Abner Bryant would have brought them to the meeting, which Harte later described in his story An Apostle of the Tules.

Also in 1856 about ten people organized and built the Cumberland Presbyterian Church “on a lot which is now a driveway leading to the cemetery,” according to Mrs. Jones.  Other Protestant congregations such as the Methodists shared the church building for Sunday services.

One of the first grammar schools in the valley was placed near the cemetery in 1854.  Mrs. Jones said Richard Webster was the first teacher.  Smith (who was one of the students) said that Webster “was popular with the pupils.  He had good discipline, but I never knew of his punishing a pupil.”

In 1858 a new high school, the Union Academy, was established across from the church on the west side of the Martinez Road (today’s Danville Blvd.).  It opened for classes in 1859 and burned down in 1868. The first trustees were John M. Jones (Mary Ann’s husband), Silas Stone and Robert Love.

The Cumberland Presbyterian Church actively promoted higher education in the west and set up a committee in 1857 to create a high school in Contra Costa County.  After a protracted County-wide debate over the school location, leaders from Alamo and Danville organized the Contra Costa Education Association and built the 3-story Union Academy for boarding and day students. It was the largest building in the Valley and ranchers came regularly to meetings, church services and other events at the Academy. During the 1861-2 floods, residents took refuge in the Academy. After it burned down in 1868, students who went beyond grammar school boarded in Oakland and elsewhere for their high school education.

In addition, in 1861 a newspaper, the Pacific Cumberland Presbyter, was published in Alamo by the Rev. T. M. Johnston.  He might have produced it out of the Academy or the Church since he evidently owned land next to the church during the 1860s.

The Alamo Cemetery was placed on a gentle hill east of San Ramon Creek in the 1850s. There might have been earlier burials, but the first recorded one was that of six-year old Callie Chrisman in 1856.

Precise American ownership of the hill at that time is unknown. John B. Watson owned property along the Martinez Road in this area and sold a parcel to August Hemme for his first home in 1856. Watson and Hemme were both community-minded.  Watson donated land for the new Cumberland Presbyterian Church in 1856, while Hemme evidently sold the Union Academy parcel at a very reasonable price in 1858.

By the 1860s valley residents and visitors frequented the small downtowns in Alamo, Danville and Limerick/San Ramon to use the general stores and post offices, blacksmith shops and one-room grammar schools.  Disagreements over the Civil War created tensions during these years.  But the existence of the high school, church and cemetery clustered on the Alamo-Danville border helped gather people together and nurture the new communities. 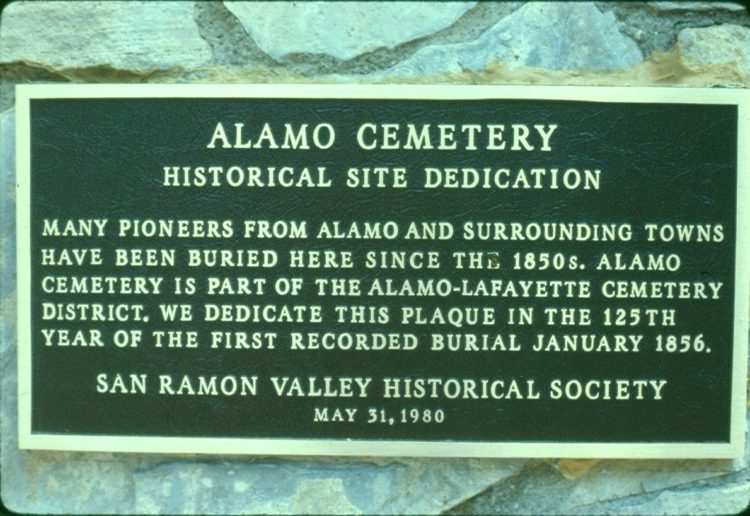 The San Ramon Valley Historical Society recognized the cemetery’s history on May 31, 1980 not long after they organized. A program to dedicate this historical society plaque took place on May 31, 1980 with the Presbyterian Church’s pastor Rev. Orville Shick presiding.

Alamo-Lafayette Cemetery District; Virgie V. Jones, Be It Ever So Humble.