In 1977 a plaque recognizing the Danville Hotel was dedicated by the San Ramon Valley Historical Society. This building is indeed a historic one, built not long after the San Ramon Branch Line came through Danville to San Ramon.  An Irish immigrant family, the McCauleys, bought property and built the Hotel, so the building’s long-term success is also an immigrant success story. 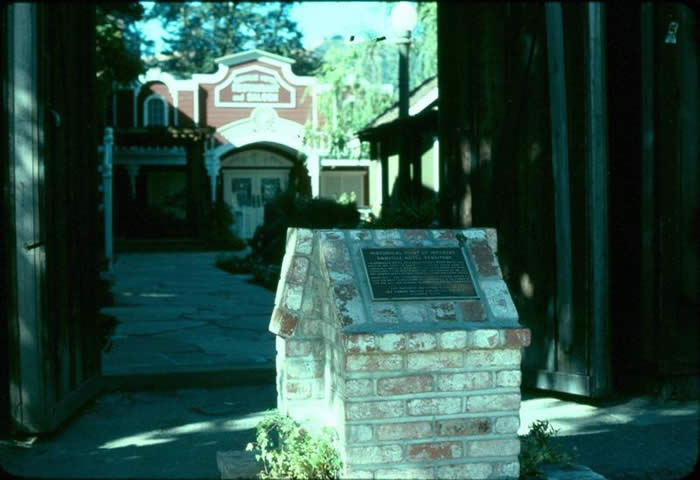 Plaque as it appeared originally, just outside of the Danville Hotel Territory

The Danville railroad station land was purchased from John Hartz and was quite large.  Ultimately a two-story depot and several warehouses were built, in addition to corrals and worker housing. Hartz subdivided his remnant property east of the station and the new Railroad Avenue in July of 1891. This land provided lots on Hartz Avenue (50 x 50 and 50 x 100), most of which became home sites.

Edward and Mary Bridgett McCauley bought lots 6, 7, 8 and 9 on Railroad Ave. for $500,  from Prospect Ave. to Short Street across the street from the Southern Pacific station land.  As historian Irma Dotson wrote, the Contra Costa Gazette repeatedly called for a hotel near the depot and then reported that the Hotel Danville was ready for business in 1892. The Gazette in November 3, 1892, reported: “Danville can at last boast of a restaurant. Travelers can be lodged and fed.”

The McCauleys had moved to the area in 1868, first to the Tassajara Valley and then to a 162-acre ranch near Green Valley.  Their family of six daughters and three sons helped run the hotel and ranch. They built a one and a half story Folk Victorian home for themselves, since reportedly, Mary McCauley didn’t like travelling daily from the ranch to the hotel. She prepared the meals for visitors and her pies were highly regarded.

Danville’s main downtown was located on Front Street during the nineteenth century. As San Ramon Creek peeled off one side of Front St., businesses and homes were built on Hartz Avenue and Hartz became the main thoroughfare.

In 1911 Mary Jane and Sarah Ellen McCauley (Parker) bought two lots on Hartz Avenue. These two daughters were deeded the Railroad property in 1920 and, in 1927, the hotel and McCauley house were moved to the Hartz lots, facing east. This move symbolized the decreasing reliance on the train and increasing use of the automobile.

The sisters managed the hotels until the 1930s when they leased the property to a German chef, Paul Zeibig. Zeibig opened a restaurant which advertised fine dining and served liquor as well. He advertised the Danville Hotel Restaurant as the place to go and drew patrons from as far away as San Francisco. Occasionally he would walk around Hartz Avenue in his white chef’s hat. World War II and gas rationing ended easy drives for those who wanted to come to Danville for a rural excursion and good meal.

In 1952 the lively Russel Glenn leased the hotel, buying it in 1956. He worked to make the hotel a tourist attraction, painting it red and white and adding a Ghost Town patio and other buildings. He had some success and lived upstairs at the hotel himself. After trying to sell the property, he decided instead to expand, purchasing the entire block. He built a covered wagon entrance to the Danville Hotel with live music. In 1965 he added the large Silver Dollar Room on the Railroad Avenue side of the property.

The next owners were Jerry and Aileen Carter who renovated the property, dubbed it the Danville Hotel Territory and decorated in a 19th century theme. They turned the large restaurant into the popular Danville Hotel Restaurant and Saloon which re-opened in 1976. The Historical Society’s plaque #5 was dedicated on Nov. 11, 1977.

A new, prizewinning development called the “Danville Hotel” with retail, restaurant and residential spaces opened in 2016 and now covers the block. Happily, the restored Danville Hotel and McCauley House remain.