Not long after the San Ramon Valley Historical Society was founded in 1970, the Society began placing bronze historic plaques in various valley locations. The first one was dedicated in 1972 and commemorated the 200th anniversary of the first Spanish expedition through Contra Costa County.

The Spanish had first entered Alta California in force in 1769, gradually moving north from San Diago.  Missions were the main colonizing institutions while a few presidios were established dotted along the coast. Pedro Fages was one of the officers in the 1769 invasion and was chosen to lead a 1772 trek north out of the Monterey Presidio.

Capt. Fages was charged with looking for a way around the San Francisco Bay so that a mission honoring St. Francis could be placed on the north shore. He led a 15-man escolta which included “six Catalonian volunteers, six leather-jackets, a muleteer, and an Indian servant,” according to Franciscan missionary Padre Juan Crespi who was also part of the expedition. They skirted the Berkeley hills, traveled next to the strait into Contra Costa and discovered two huge rivers that fed an extensive delta. Then they turned south through the valleys for the return trip to Monterey.

The Fages-Crespi expedition was significant because both leaders wrote diaries which provided the first European descriptions of the East Bay. They came through the San Ramon Valley on March 31, 1772.  Crespi wrote:

“…we entered a beautiful valley of considerable width and good level land, well covered with grass, with good arroyos well grown with alders, cottonwood, laurels, roses, and other trees not known to us…we cam to three villages with some little grass houses. As soon as the heathen caught sight of us they ran away, shouting and panic-stricken without knowing what had happened.”

Often the Indians had heard about the Spanish invaders, but evidently the word had not reached the Bay Miwok Tatcans of Alamo-Danville. The Spanish riding on horses and mules must have seemed like bizarre new creatures to the Indians.

On April 1, 1972, the Historical Society recognized the bicentennial of this contact between Spanish and Indians with a big party and a dedication. An equestrian parade featured the Danville Junior Horsemen dressed in Spanish garb and included two people portraying Fages and Crespi. Franciscan Father Godfrey McSweeney from San Damiano played Crespi. Dr. Wilson Close, a descendant of early Danville pioneer James Close, dressed as Fages and rode horseback to the event. Not a regular rider, he said that he ached for days afterwards.

Marvja Varges performed a flamenco dance and Roy S. bloss, Historical Society President, did the honors a master of ceremonies.  The chairman of the Contra Costa County Board of Supervisors, Edmund A. Linscheid, read a resolution proclaiming April 1 as Fages Day. The invocation was given by Dr. K. Fillmore Gray, pastor of the San Ramon Valley United Methodist Church which was nearby.

A bronze plaque was unveiled by long-time resident Mabel Kuss and was placed on a brick wall at the southeast corner of El Portal and Danville Boulevard, on the Sandkuhle’s Sunset Nursery property. The plaque is also California State Historical Landmark, Number 853.

Altogether a fitting tribute to the bicentennial, this first plaque event set a high standard for all future plaque dedications by the Society. The plaque is still in place and third-graders visit it regularly as part of their Passport program. 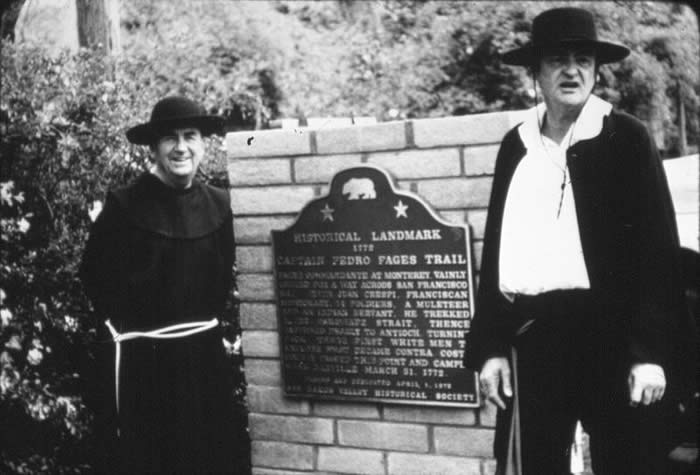