The Goold Family Is Honored with a Historic Plaque

The Goold Family Is Honored with a Historic Plaque

If you search for the third plaque which was installed by the San Ramon Valley Historical Society, you will need to be a sleuth. The plaque is placed on a stone base in a small grove of redwood trees in Danville’s Sycamore Square Shopping Center parking lot. It honors Charles Gardner Goold and his wife Allie Johnson Goold, early pioneers in Sycamore Valley and Danville.

Both Charles and Allie grew up in the Sycamore Valley area and attended local schools. When they married in 1884, they lived on the original Goold property which became part of the Blackhawk Ranch in the 1930s. They bought a ranch south of Danville from the estate of J. L. Boone in 1900, moving an 1875 house there which had been built by his father Captain Gardner Goold.  According to the Contra Costa Standard, they lost their chimney in the April 19, 1906 earthquake a mere six days after daughter Wanda was born.

The Goolds were active in the life of Danville in many ways. He was member of the Alamo Masonic Lodge and an Odd Fellows charter member in 1892. She was involved in the Danville Women’s Club and the Rebekahs. Both belonged to the Danville Grange. He was a rancher, a director of the San Ramon Valley bank and a Contra Costa deputy Sheriff for 50 years. In 1911 the Goolds were one of the first families in Danville to install electricity in a house; also that same year they bought one of the first automobiles in the valley, an Everett.

Wanda Goold married Gerald S. Deardorff in the 50-year old Danville home in 1933. They lived there, operated the walnut ranch and raised son Walter and daughter Virginia. The property included a large tank house, hay and grain silo (which later burned) and a walnut dehydrator from 1951 to 1968.

In the sixties, agents for the proposed interstate freeway wanted to buy much of the ranch. The new alignment came right through Danville next to the old County Road and a decision to have a Sycamore Valley Road off ramp had been made. Their neighbors to the south, Mildred Lynch and Frank and Florence Roy decided to sell their land. At first the Deardorffs resisted. Wanda Deardorff recalled: “We got pushed out by so-called progress…and I think the term progress was very loosely used.” She pointed out that it was a beautiful home, in good condition. They moved to Hickman in 1971.

During the 1973 valley-wide incorporation election Roy Bloss, who was then Historical Society President and a city council candidate, proposed that the handsome, historic house be saved and used as the first city offices if the vote was successful. He said there was 2400 square feet of floor area and all the house needed was a good outside paint job. However, the incorporation vote was a negative one and the house was eventually razed. 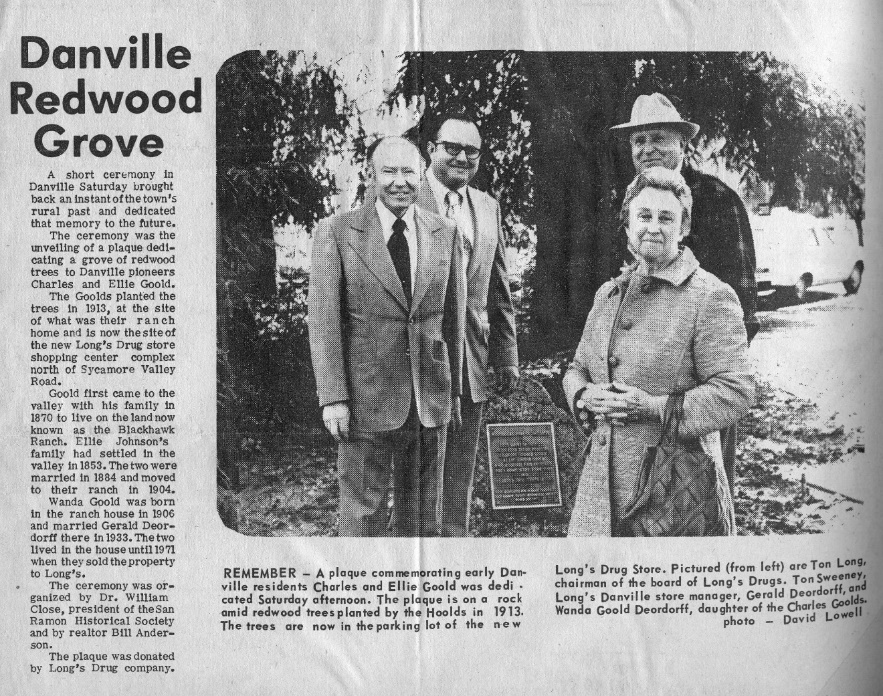 On March 22, 1975, Historical Society President Dr. Wilson Close chaired the plaque  dedication during changeable weather. One reporter said Close sped up his speech when the rain poured and slowed during milder sprinkles. William F. Anderson (Anderson Realty) helped introduce the day. He was instrumental in getting Long’s Drugs to donate the plaque. Tom Long, Chairman of the Board, was present at the dedication as was Tom Sweeney, Danville Long’s store manager.

The plaque reads: “This Grove of Trees is Dedicated to the Pioneers Charles Gardner Goold and Allie Johnson Goold, who acquired this property for a home in the year 1900 and planted these trees in 1913.”