If buildings could talk, today’s small Tassajara School House would recount children reciting lessons, ciphering, and singing in a classic one-room school from 1889 to 1946. It is the only nineteenth century school still standing in the San Ramon/Tassajara Valley and is a popular spot for artists, photographers and picnickers.

The first small school house in Tassajara was built in 1865 by Alfred Wilkes; by the eighties there were more students than could be accommodated. On January 12, 1889, ten out of ten Tassajara School District voters approved the sale of $1700 in bonds for a new school. The bonds were used to purchase a lot, build and furnish a school. Peter Anderson was paid $200 for an acre of his land on Finley Road.

The Livermore Echo newspaper (March 14, 1889) reported that the contract for the new school was let to J. L. Weilbye of Sunol.  In those days, such a small building would have been constructed soon after the contract was signed. The Contra Costa Gazette announced that the Tassajara School children raised their new flag on August 1, 1890, with appropriate ceremonies.  As part of the program, George Fergodo, Tony Silver and Walter Scott gave the recitation “Red, White and Blue” and county school board member A. J. Young gave a speech “appreciated by young and old.”

Students from first to eighth grade walked, rode horses and took buggies to get to school. In 1889 Richard D. Williams was the teacher. Roger Podva (born in 1884) began school in 1890 and said there were 42-75 students at the school when he attended, sitting two to a desk.They learned mental arithmetic, reading, geography, spelling and writing. A picture of George Washington hung on the wall. 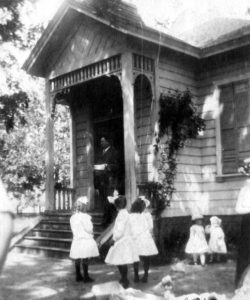 According to historian Vivian Coats Edmonston, “Roger Podva said that the black walnut trees in the school yard were planted by the children, starting with the oldest child down to the youngest.  That was Roger.  His tree was planted by the ‘rest room’.”

In an example of the American “melting pot” Portuguese and Danish students exchanged lunches -- linguisa and sweet bread for sandwiches slathered with butter.

Because of dirt roads, the school year calendar varied. In 1921 school opened for the fall semester on July 18, according to the Contra Costa Gazette. It opened early “as a mid-term vacation of two months is taken each year during the heavy rains of the winter when students residing in the rural sections are unable to attend.”

In 1946 Tassajara School enrollment dropped to 11 after two large families moved away. Some parents thought that students could get a better education by going to a more modern school. The school closed, and students, teacher Gertrude Arendt and their desks transferred to Danville for elementary school. 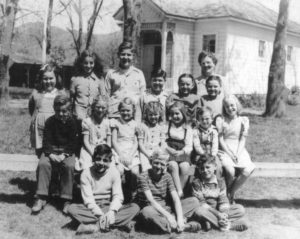 Last students to attend Tassajara in 1946

The abandoned school fell on hard times. The bell disappeared, windows were broken and Washington’s picture was stolen. Tassajara volunteers organized to save the School House, replacing the foundation and roof, putting in new wiring and making other improvements. They created the Tassajara-Highland Improvement Association and, in 1970, a new volunteer fire district.

An annual picnic at the school included a barbecue, raffles, auctions, games and recruitment for fire volunteers. Funds were raised for the restoration. Eventually the picture of Washington was returned anonymously by the youth who took it; in a note he said his conscience had bothered him. Mrs. Arendt donated a World War I Liberty Bell from Pleasanton.

The Tassajara Fire District maintained the school and, when the volunteer district merged with the San Ramon Valley Fire Protection District in 1990, the school became the responsibility of the SRVFPD. 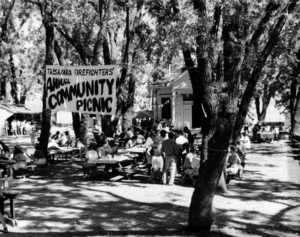 In 2012 it was deeded to the Museum of the San Ramon Valley. After much effort by museum volunteers, the school house was placed on the National Historic Register in 2014. It has a flagpole donated by the SRV Fire District on the original site and the open stable on the site is a reproduction which provides some outside shelter.  A historic plaque was placed on the site by the San Ramon Valley Historical Society on August 14, 1999.

Each winter through spring the popular one-room school program, taught by Museum of the San Ramon Valley docent-teachers, draws over 3000 third graders and parents to this little gem, the Tassajara School House. 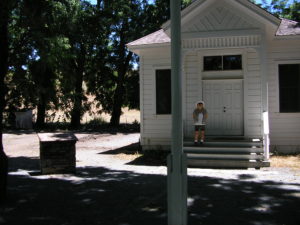