Today’s Veterans Memorial Building sits proudly in its original location in the heart of Danville’s Old Town, the corner of Hartz and Prospect Avenues. The original two-story section of the hall has been restored by the Town of Danville with a new addition used by veterans, senior programs and the public to the east. A porch along the Hartz Avenue side was also added.

In 1919, Congress established the national charter for the American Legion to honor veterans of the Great War who had served stateside or overseas. Contra Costa County administered a California bond issued to build veterans’ memorial halls in each town with an American Legion Post. 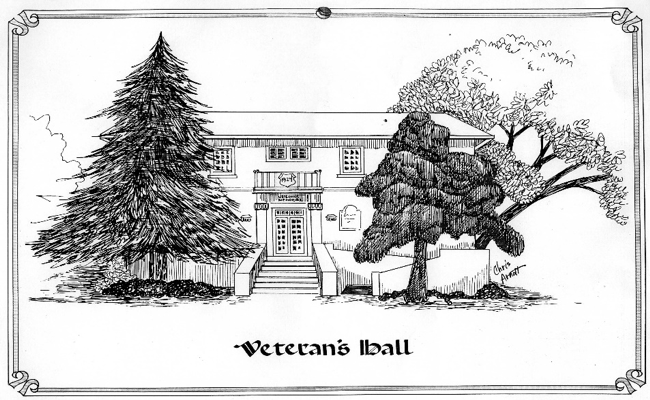 Joseph Bispo charter member of American Legion Post 246 (chartered in 1921) relocated his craftsman homes to allow the classical style Danville American Legion Hall to be built on 3 parcels at East Prospect and Hartz Ave. The building was designed by James T. Narbett, built by Dinnie Construction for $18,000, and inspected by E.A. Root. It was “Dedicated to those who served” on April 2, 1925.

Beginning in 1926, the veterans opened the building to all veterans organizations as well as to the community, including the public library, scouting, and service clubs. 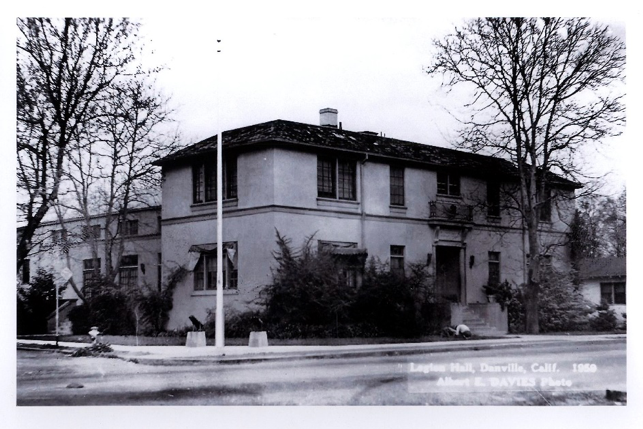 It was used for veterans’ meetings, the Chamber of Commerce office, the Justice of the Peace court, the hilarious Legion Follies from 1946 for about 10 years, plays, parties, recreational classes and events of all sorts. It was the County Supervisor’s office in the late seventies.

Saturday night dances were a primary use for the hall. Today many people still remember the monthly “dollar” dances, with Mabel Christianson and her band teaching people how to dance the two-step, mazurka and polka. Romances blossomed at these dances and older couples enjoyed the dancing.

In 1941, a Walnut Kernel reporter wrote:

“What is probably the oldest continuous series of dances in Contra Costa county is conducted monthly in the Danville veterans' hall by the Mt. Diablo post of the American Legion. On the first Saturday night of each month, the post and women's auxiliary have an oldtime dance where middle-aged folk may enjoy the … dances they learned when children.” 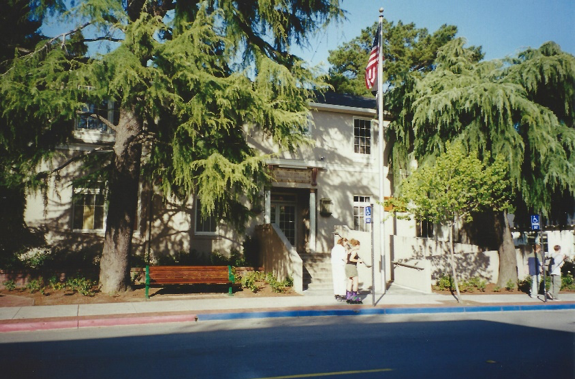 In 2008, the county transferred the land and building in trust for veterans to enable a partnership between the Town of Danville and the Veterans Memorial Building Development Committee of San Ramon Valley. Designed by Architectural Resources Group, Inc. and built by Zovich Construction Co, the $8,329,797 project restored the historic classical front while doubling the building space, enabling a Veteran’s Library, expanded auditorium, and senior wing. Danville decided to spend its entire EBRPD WW local grant of $1,900,000 to complete the building.

The restored building continues to house American Legion Post 246, VFW Post 75, and Viet Nam Veterans of Diablo Valley and welcomes Marine Corps League Detachment 942, the Military Order of World Wars, and supporting military auxiliary organizations to honor veterans for their service and sacrifice. A variety of services for veterans are provided in the Veteran Resource Center.

Rededicated by Town of Danville on April 23, 2012, the Historical Society plaque was dedicated on Aug. 15, 2012 and is placed next to the front door at 400 Hartz Ave.  At the building’s corner, plaques honoring deceased veterans of several wars are in place.