In 1869 Woman Suffrage Associations were organized, beginning in San Francisco. In Contra Costa County such an Association was organized in 1870, with a large contingent coming from the County seat of Martinez.  Elmer H. and Livia Cox from San Ramon were active in the cause, perhaps because they had five daughters. Two of their daughters, Mary and Panthea, married leading ranchers R. O. Baldwin and William Meese.

The first time woman suffrage came to the ballot box in California was 1896.  At that point San Francisco had fully 25% of the voters and its hospitality supporters were adamantly opposed to women getting the vote.  Many of the people advocating for woman suffrage were also active in the powerful Women’s Temperance Union which concerned the liquor interests.  Even Susan B. Anthony came to California and spoke in Martinez in October of 1896.  The effort went down to defeat,

The twentieth century was a different matter. San Francisco no longer had such a high percentage of voters. And five other western states had already supported votes for women.  Wyoming, Utah, Washington, Idaho, and Colorado.

This dramatic poster by Bertha Boye appeared all over San Francisco: 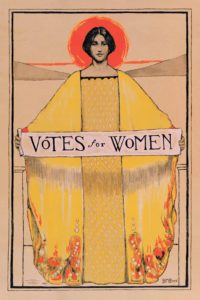 After the earthquake in 1906, a suffrage convention of considerable size convened in San Francisco. The fight was on.” The strategy would aim hard at the state's small towns and Southern California. Aided by the automobile and telephone, north and south suffragists merged to form an impressive campaign machine. “The work was intense and highly individual. Church to church, school to school, club to club, door to door, person to person”; all received handbills and newspaper articles about the suffrage movement. (Silver)

Little towns where nobody ever saw a suffragist learned about women's rights and the importance of the right to vote. The College Equal Suffrage League staged unique publicity events, often using their ‘Blue Liner,’ a special seven-seated touring car which drew men in small towns to see the car and hear the message.”   (Silver)

Intelligent and fair minded men everywhere are rallying to

their (women’s) support. They are beginning to think that

the onus is resting pretty heavily upon them of having their

mothers, wives and sweethearts rated along with Chinamen,

idiots and insane persons when it comes to voting.

“It was planned to have a debate at our next meeting and upon the subject -- Resolved ‘that Women be granted the right of suffrage.’ Affirmative Sister Nina Williams and S. E. Wood -- negative Bro W. E. Stewart and  “After some little discussion, it was decided the debate should be given in open Grange, and without Judges appointed, -- letting the decision rest with the audience.”

Later that month the CC Gazette (8/26/1911) reported that a large meeting on Equal Suffrage had been held the previous Saturday, at the Danville Grange Hall. Suffrage supporters addressed the meeting, arriving in the famous Blue Liner automobile for the meeting. “There were also songs and a dance given by members of the party who were present to assist in organizing an equal suffrage club there.

“There was a debate by some of the local members of the Grange for and against “Equal Rights” participated in by Mrs. E. Williams and Miss Libbie Wood against Rev. C. Woodword and Will Stewart. The women for and the men against. At the close of this debate a rising vote was called for from all people present as to which won in the argument, and the ladies were given the decision. There was a large crowd present from the surrounding country.”

Another article in the August 26, 1911, CC Gazette had this title: “Suffrage Clubs Gaining Strength in Contra Costa…Following the meeting of the suffragists in Danville last Saturday when a club was formed there, the party touring Contra Costa in the “Blue Liner” held a fine meeting in Byron.” 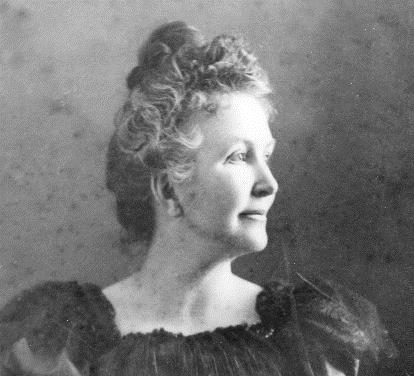 The Danville Equal Suffrage Club list included the officers Lillian Close, Elizabeth Wood, Nina Williams and Ada Cornwall (Sec. and Treas.). Lillian was part of the Close family which owned a large section of Danville’s downtown from Front Street, facing Diablo Street to Hartz Avenue; she was also President of the Danville Improvement Club. Elizabeth was the sister of teacher Charlotte Wood and a former Danville Grange Worthy Master, Nina had grown up in Tassajara Valley, was active in many organizations and became the Worthy Master in 1914-15. Ada was a high school teacher in the new San Ramon Valley Union High School organized in 1910.

The San Ramon Hall was completed in 1911 and several San Ramon women had promoted and raised funds for the Hall. They included ranchers Mary Wiedemann, Anita Glass and Minne Lynch (Mrs. Leo).  As with the Danville Improvement Club, women helped make things happen in the San Ramon community.

On the October 10, 1911 ballot, voters in Alamo, Danville and Tassajara opposed women’s suffrage, while San Ramon and Walnut Creek voters supported it. Clearly not all farmers supported woman suffrage. Here are the valley results:

Suffrage workers such as Selma Solomons initially thought their cause had lost. But, as the other votes were reported from the Central Valley and Southern California, the results improved. On Thursday it was confirmed --  they had won! California became the sixth star in the flag of woman suffrage by a majority of 2 % -- 3,587 votes out of 240,000 votes cast. The New York Times trumpeted: California Farmers Give Vote to Women. Just not in the San Ramon Valley.

By 1915, nine Western states had six and one-half million women voters, translating into 45 electoral votes. The campaign techniques and the Western example helped promote success in the eastern states. On August 26, 1920, the 19th amendment giving women the franchise was certified and added to the U.S. Constitution, a day now celebrated as Equality Day.

Solomons, Selina, How We Won the Vote in California, A True Story of the Campaign of 1911